Death of a General

A few years ago I got deep into the history of the American Civil War and it still holds a fascination for me today. Of all the great men involved two figures stood head and shoulders above the rest. One was the Union General (and later President) Ulysses S. Grant and the other was the Confederate General Robert.E.Lee. Today is the anniversary of the death of Lee in 1870 after suffering a stroke two weeks earlier. 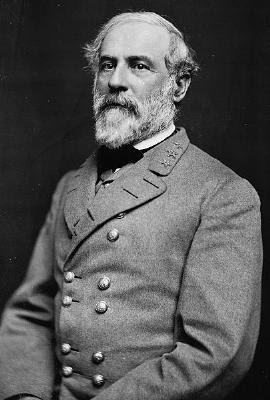 Much has been written about both men but I believe the following excerpt from one of Lee's letters to his Sister in April 1860 sums up the man perfectly.

"With all my devotion to the Union and the feeling of loyalty and duty of an American citizen, I have not been able to make up my mind to raise my hand against my relatives, my children, my home. I have therefore resigned my commission in the Army, and save in defence of my native State, with the sincere hope that my poor services may never be needed, I hope I may never be called on to draw my sword....."

Lee was offered command of the Union Army in 1861 by Lincoln himself but his conscience would not let him take up the post against his fellow Virginians. This was an extraordinary act of an extraordinary man and I always felt it was a tragedy that he found himself on the 'wrong' side of the war.
Posted by BigLee at 13:32