A Slice of Random Pie

This isn't about what we eat during the game (I talked about this the other day), but what our Characters eat. No self respecting PC would set off into the dungeon without his 'Trail Rations' or 'Iron Rations' as they used to be called in older versions of the game. Now I don't know about you but this sounds suspiciously like code for "we couldn't be bothered to come up with something more interesting in the rules... if it doesn't inflict damage we ain't wasting time on it". Or maybe I'm being harsh with the designers (sorry Dave & Gary). All of which begs a couple of questions.

First off, what exactly are Iron Rations? The idea of a pre-prepared food ration for soldiers has been around since the early 1800's but only got fully established in the 20th century. Often these were designed as emergency rations for when troops were not able to be fed and supplied by an army canteen. Rations often include a meal of some kind plus the necessary makings of a hot drink such as coffee or chocolate. The meal might be a dried food item designed for field cooking or it might be a ready-to-eat item such as an energy bar. One thing that is clear is that nothing like this existed in the quasi-medieval world in which D&D is set.

The second questions is, what would be a better alternative for our PC's? Tolkien developed the ideal alternative in the form of the Elven Lembas Bread. This is often referred to as waybread and may have been based on the well known (but much less nutritious) hardtack biscuits used by the navy. This would complimented by the invigorating Ent-draught, a drink brewed from mountain spring water by the Tree Ents of Middle Earth. 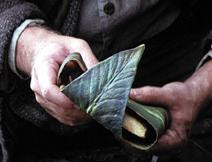 Of course you don't have to plunder Tolkien for ways to feed your Characters on their adventures. There were plenty of preserved food alternatives used by medieval travelers that would easily fit into a standard game setting.
I expect many roleplayers will consider Rations the same way they do Encumbrance, something they can safely ignore because the GM is focused on storytelling not bookkeeping. But I think this is a great pity and a missed opportunity for side adventures and a little 'local colour'. Its a chance for the Ranger to show off his woodsman skills or the Archer to develop his hunting technique.
Posted by BigLee at 10:30