I'm having one of them days when all I want to do is flatten something with a tank (or in this case an APV).

I shot this little sequence at War and Peace last year. Wanton destruction, but great fun to watch over and over again... I must stop fantasising about doing this to the neighbours cars!
Posted by BigLee at 08:39 8 comments:

Last week I bought a load more 6mm buildings from Leven Miniatures for my 6mm North Africa project. These will be added to my existing collection of buildings and combined I now have enough to make a small town or administrative centre. I haven't done anything fancy with the painting, although I have added some colour to the market tents and awnings. 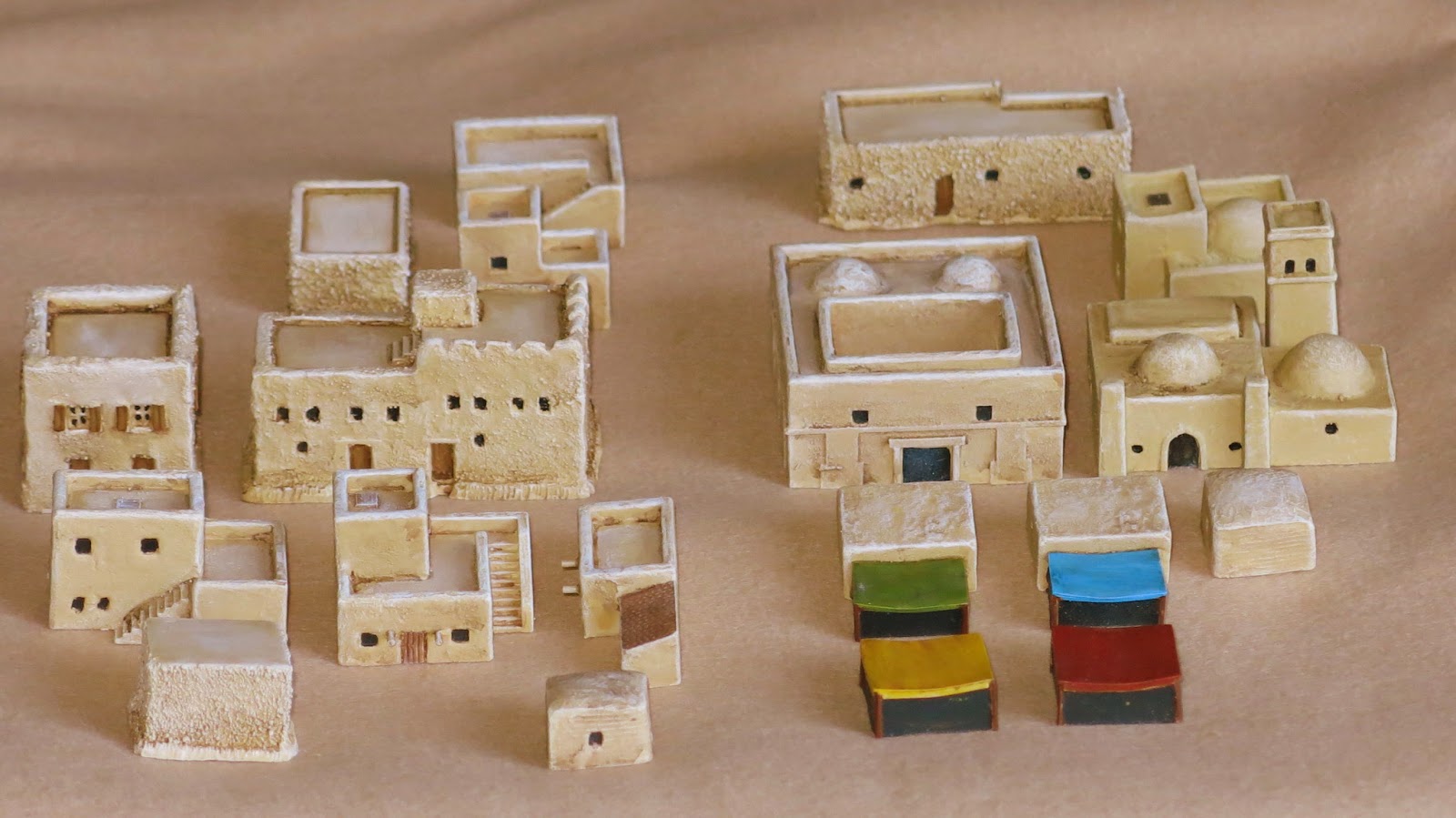 All were base coated in Iraqi Sand (819) and then I painted in the windows and doors. Next I dry-brushed with Ivory (918) and washed with Soft Tone Quick-shade with a final very light dry-brush again in Ivory. I may well add more buildings at a later date but for now I have enough for my immediate needs.
Posted by BigLee at 17:25 9 comments:

Waiting for the Postman

Childishly excited this morning. I've just placed a new order for some more Leven Miniatures 6mm buildings. I've bought myself a town, albeit a scrappy looking pile of bricks and adobe somewhere in North Africa. These resin buildings are always a pleasure to handle with good detail and zero blemishes to the resin surfaces they paint up nicely...and they are very reasonably priced! Here's some I painted before... 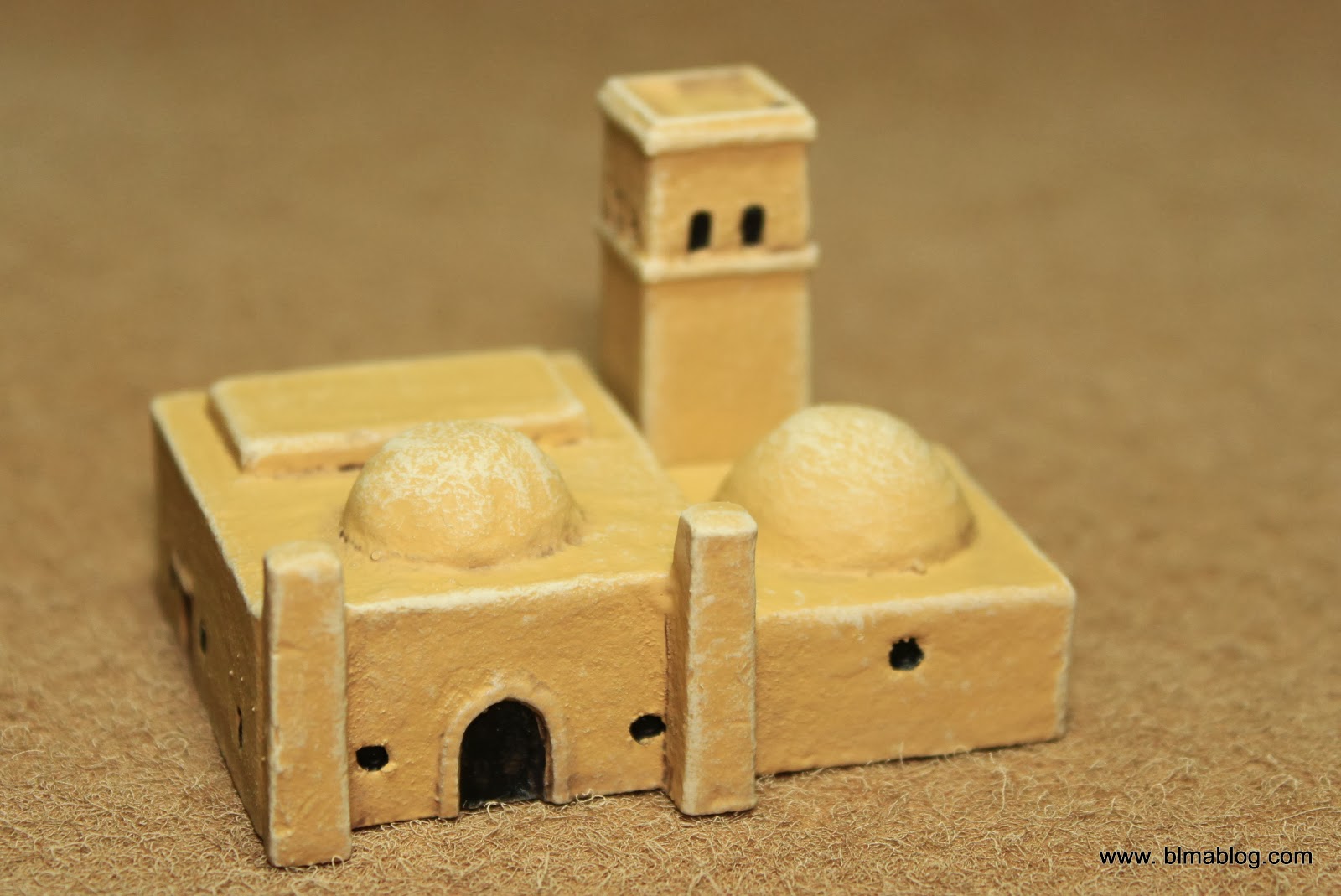 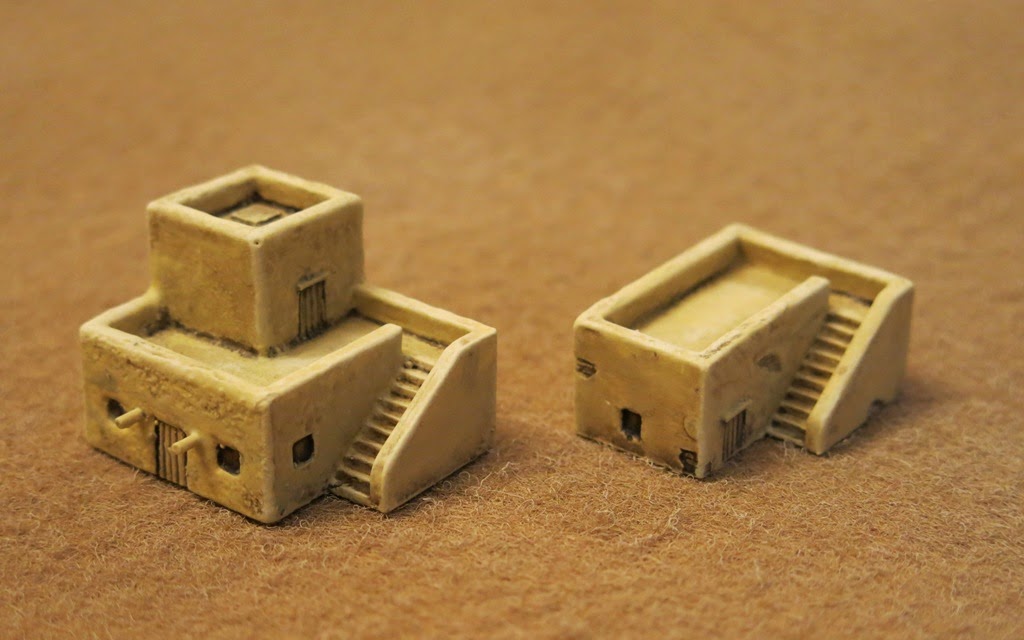 This time I have bought a load more dwellings and market traders buildings. Put with my existing collection I'll have a reasonable sized town, or enough models to represent a couple of villages. Needless to say I'll post pictures once I have them in my eager hands and I have painted them (which won't take long).
Posted by BigLee at 07:16 1 comment:

Sunday morning I crossed the river to Sidcup and the Skirmish Toy Soldier show. This is a small event with a handful of display tables and traders, but its always a good place for a quick chat with friends. The show started off very quiet this year, maybe because if was Mothers Day, but it picked up by the time I left around midday. As well as meeting up with a couple of the Rejects I also bumped into Bob Cordery and John Lambshead which was nice as I haven't seen them for a while. As usual I took my camera and shot a few pictures so here's a taster of what was at the show. A great little show as always and it was great to meet with a few friends and exchange greetings. The best thing was that I managed to find several books that I wanted.

Not bad for a small show and a great way to keep out of the wife's hair for a couple of hours!
Posted by BigLee at 15:24 7 comments: 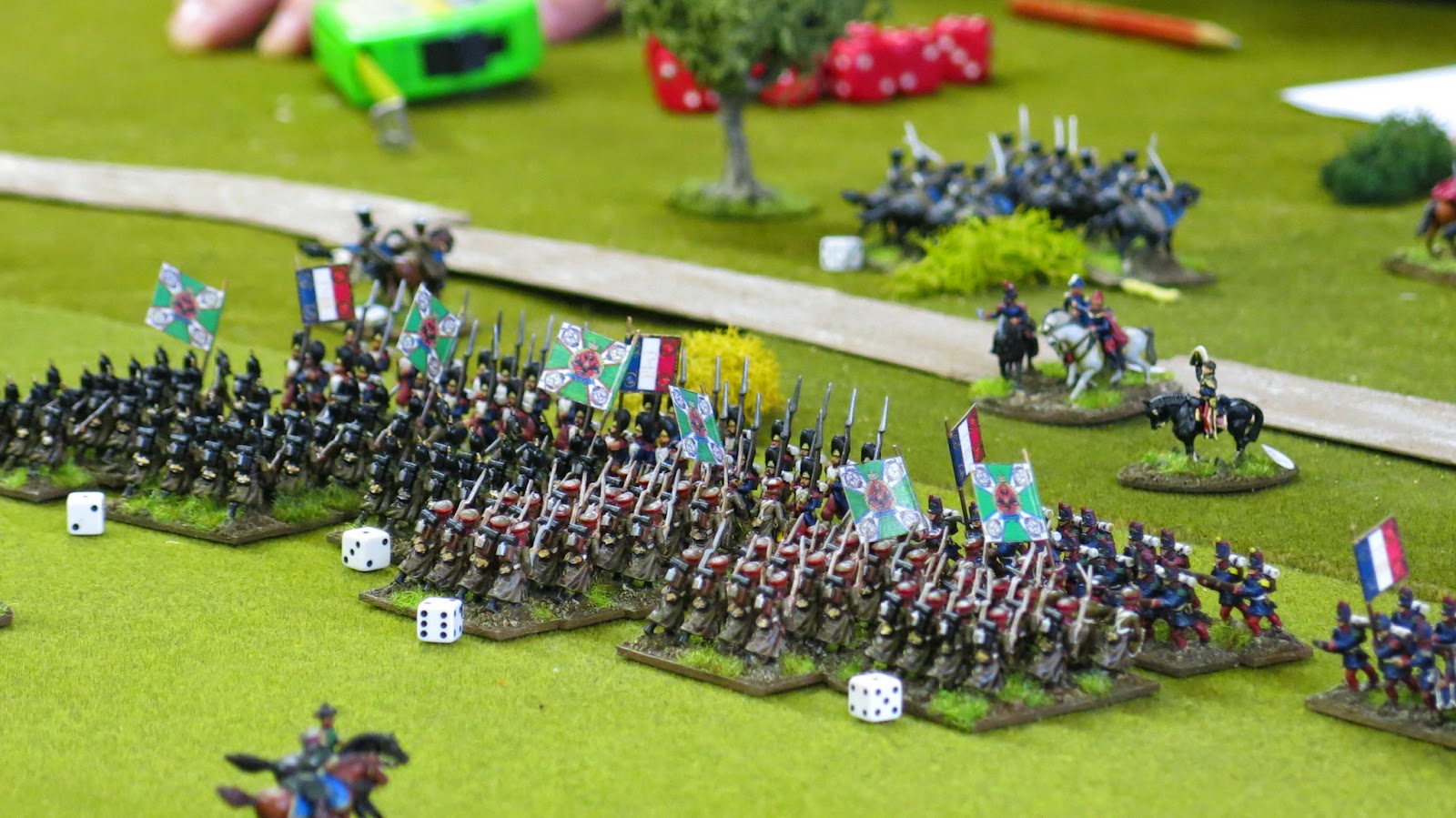 On Sunday the Rejects got together for a 15mm Crimean War battle that pitted the skill of an Anglo French army against the Russian bear. This game we invited a guest, Mike Sayce of The Words of Subedai probably best known for his regular contributions to Wargames Illustrated. I ended up faced off against his troops and while he didn't have it all his own way (photographic evidence to follow!) he certainly gave my Russians a rough time.

Setup
The French and Sardinian Armies have been quickly overrun at the battle of Tchernaya and the Russian Bear is rapidly advancing to exploit the victory. Heading towards the town of Kadikioi the Russians hope to drive a wedge between many of the forces in the area, cutting off all hope of escape for them. French reserves supported by some British are preparing a hasty defence knowing the situation is dire. If Kadikioi falls then Balaclava only a few miles further south could soon follow. Balaclava is a vital supply port through which re-enforcements and supplies arrive to support the British Army.

Analysis
This was a test of nerves for the Russians. Our plan (if you can call it that) was to hit the French and British line as fast as possible with as much as possible. No subtlety, no finesse, just brute force and weight of numbers. But crossing the battlefield to reach the enemy was always going to be a brutal battle of attrition and if the Russian players were to stand any chance they had to hold their nerve and stick to the plan. It was a close run thing and in the end it came down a test of nerve and a few crucial dice rolls.

Final victory points were Russians 16 and French/British 9
Posted by BigLee at 20:57 7 comments:

Progress with the Bersaglieri

I have been making slow progress with my Bersaglieri, but at least it is progress. I have been getting a little done each evening and over the course of the last week I have cleaned and based 157 infantry, nine 47/32 anti tank guns, nine HMG's and nine 3-Ton Trucks. I've also based a truck mounted AA unit (20/65 Guns on 3-ton truck's) a Motociclisti platoon. Yesterday I finished adding my special blend of sand to the bases and the next step is to spray prime all the models. If the wind drops I'll nip out in the garden to do this later. 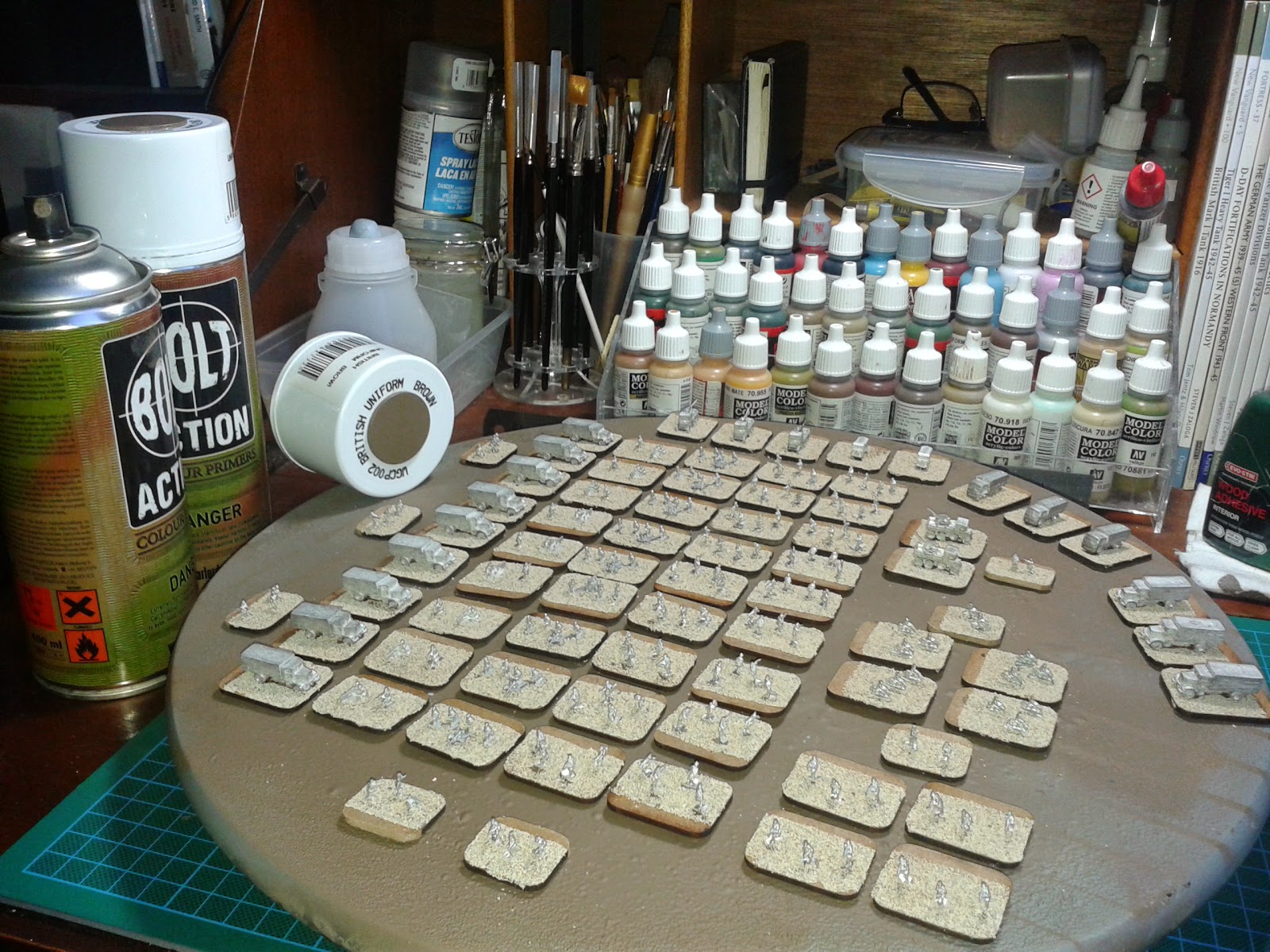 Doing the whole company and support platoons like this does make it a big job but it has also given me a chance to visualise the completed formation and make some adjustments. The other advantage is that when I finish this I will be pretty much ready to play my first Desert Raiders game. The only remaining job to do is make a runway for the airfield (a slightly important oversight on my part!) and then I'll be ready to rock.
Posted by BigLee at 16:49 1 comment: