What makes a good wargame scenario? Is it problem-solving, tactical compromises or simply lots of Action? I discuss a few traditional ways to make game scenarios more interesting but also have a radical suggestion to put before you.
Posted by BigLee at 12:00 No comments:

Three Museums and a Cathedral

My recent trip to the south of England for a holiday in mid-winter wasn't as dull as it may sound. No matter where I am, and regardless of the weather, this old Grognard can still have a few Miniature Adventures.
Posted by BigLee at 17:00 2 comments:

This is the End

Have you ever given up a Period, or sold an army? Have you ever decided enough is enough and declared a project 'finished'? Today I discuss moving on to other things and the occasional regret of having done so.
Posted by BigLee at 12:00 No comments:

The Travel Toolbox: Taking your Hobby on Holiday

Do you take your hobby on holiday with you? Setting aside the idea of bringing your painted armies to the beach is there some aspect of your hobby that comes with you when you travel. Maybe you bring a box of paints, assemble some figures or just catch up on your reading? Today I discuss some of the things I have done in the past, and my plans for my next holiday with the family.
Posted by BigLee at 12:00 5 comments:

The Battle of Pasta Castiglione 1796 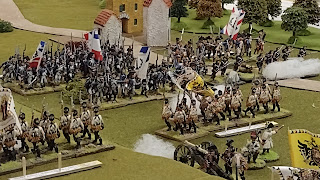 Last weekend the Rejects assembled in the Shed-o-War for another 28mm Napoleonic game using Richards homegrown rules. These were debuted the Broadside show in November last year and we asked Richard if he could run another game while the rules were still relatively fresh in our minds. The result was a very exciting and challenging game with a result that went to the wire and kept us on our toes right to the end.

Normally I would present an order-of-battle and breakdown of the troops but I'm running out of time to get this done before heading away for the weekend. It's been a busy week on several fronts and I still have several projects to wrap up before the evening is over!

The game is based on real events and see's the French Army bearing down on the Austrians with superior numbers. An Austrian attempt to relieve the besieged city of Mantua by a pincer movement down both sides of Lake Garda has thrown back Quasdanovich's western wing back to the north in disarray at the Battle of Lontano. However, Wurmsers army now threatens to push the French back towards Lombardy & Piedmont. The French are forced to lift the siege of Mantua to deal with the Austrians. Fiorella is marching hard towards the Austrian rear while Bonaparte's army attempts to push the Austrians back. The plan is to try to capture the heights and Solferino to cut the Austrian line of communication, forcing them back towards Mantua. If they can achieve this the Austrians will be trapped between two armies and destroyed.


Conclusion and Analysis
Richard consults his charts - he's been keeping a careful log of casualties, destroyed and routed units, killed leaders and captured colours...and he calls the game for the Austrians! Ray, Surjit and I are very pleased with this, we thought we couldn't win this game when we saw the setup. Despite Rays appaling dice, we played a fighting retreat making the French bleed for every inch of ground they had to take.
Unfortunately in history, the Austrians were being pinned in place as the French recently from Mantua advanced towards their rear. Strategically the Austrians were on to a looser from the start, but tactically we held the day and gave young Boney a bloody nose.
Posted by BigLee at 20:15 5 comments:

AHPC Update 3 - The Sands of the Sud-Oranais

I was planning on doing these Analogue Hobbies Painting Challenge updates weekly, but that idea was abandoned pretty quickly. We are a little over halfway through the event and I have managed to hit my target. I still have a lot left to do so I have increased my target by another couple of hundred points just to keep the pressure on me to get as much painted as I can for my French Foreign Legion project.
Posted by BigLee at 12:00 1 comment:

This afternoon I learned that one of my videos had been named as a finalist in the Quick Strike Category of the Little Wars TV Caesar Awards 2022. I'm really blown away by this, especially when I know how good some of the other contenders were because I nominated many of them myself! Thank you to everyone that nominated my Operation Caravan video and please got to the LWTV list of nominees and check out some amazing filmmakers in our hobby.
Posted by BigLee at 20:21 1 comment:

What is the perfect length for a wargame? The answer to that question will likely depend on who's answering, what games they play, who they play with and where they play. But can there be a consensus on the perfect game length?
Posted by BigLee at 12:00 No comments: