Sunday's game in the Shed-o-War had to be canceled because our umpire for the game had fallen ill with Covid (yes folks, it hasn't gone away!). Thankfully he is up to date with his vaccines and while he felt a bit grotty, he was still well enough to host a game remotely over Zoom. So instead of playtesting his rules for the French Wars of Religion, we played a French Revolutionary game using Volley and Bayonet. The result was an excellent encounter that kept us busy all day. The only thing missing was Stuart's Spam sandwiches at lunchtime. 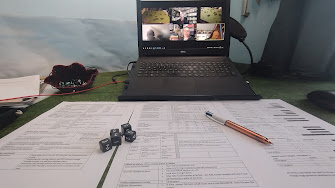 I took a few poor-quality screenshot photo's during the game that gives an idea of the action. However, I recommend checking out Richards's blog where he has posted some much better-quality pictures taken during the game: My Wargaming Habit
As this was a meeting encounter both sides were marching on from points on opposite sides of the table and would need to form up to engage the enemy. I was the leader for the French Side but as I hadn't played these rules before I relied heavily on the guidance of Ray, my second in command, on how the game played. We had time for a brief strategy session before everyone else Zoomed in and Richard began explaining the game. 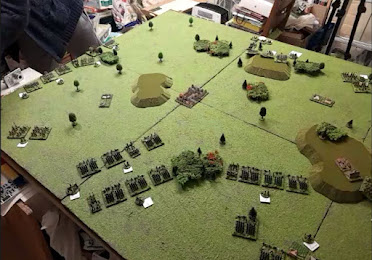 Volley and Bayonet have been around for a long time (1994 I think?) and Richard was using the 1st edition book for this game. It is very much a grand tactical scale battle, with each 60x60 base representing a battalion of several regiments. Movement distances are generous but that just helped to speed the game along with each turn representing about an hour of action. We managed 5 turns which roughly equaled the time we were playing in the real world. I think Richard is considering using these rules for a big campaign and has been experimenting with different rulesets to find the best choice for remote play. Frankly, these rules worked a treat and I'd be quite happy if we used them for our games, but that's a decision for Richard to make.
Incidentally, all the figures for this game are MDF flats from Commission Figurines. Richard has made an excellent job of painting these and frankly, you have to get a lot closer than the standard '3ft rule' to tell they aren't 3D metal figures. 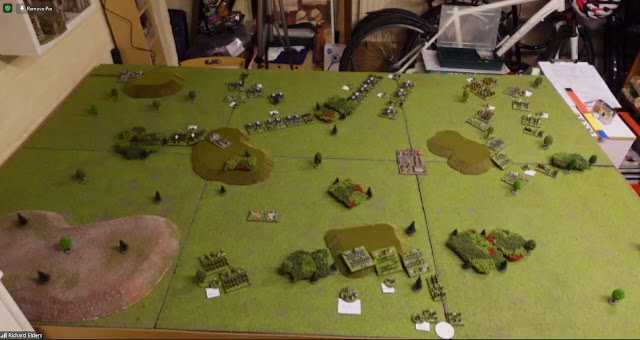 So as mentioned our Divisions entered the table in columns with a gap between each base to represent the 'strung out' nature of marching along a road. So Ray & I decided not to rush and to only take a part move with the lead battalions so the following ones could catch up. The aim was to get each Division into a line as quickly as possible so that individual battalions would not be vulnerable to flanking attacks. In my sector on the left of the French zone, I had a wood which was both an obstacle and also provided a good anchor point for deployed divisions. The only formations that moved significantly forward were my Cavalary Battalions on the left and Rays on the right.
I was facing Surjit on my side of the table and true to form he rushed his Battalions forward to close down my room for maneuvering. Both Cavalry Battalions were soon engaging with the Austrians and I pushed forward my forward infantry division and artillery to support the attack. Unfortunately, my dice rolling was less than inspiring and this division suffered as a result. However, this gave me room to deploy and take up static positions with the following division and then fall back the damaged one to form a fairly solid line.
By this stage, both I and Ray had settled our divisions into a good line and would now get a bonus in combat because our Battalions were stationary. If the Austrians attacked they would do so at a disadvantage. And that is precisely what they decided to do, attacking simultaneously along most of our line. On the receiving end, it felt quite alarming, but the dice gods were smiling on us and the resulting battles broke the Austrian army with acceptable losses on our side.
This was a thoroughly enjoyable game and a set of rules I hope we get to play again. I strongly recommend having a look at Richard's post on this, plus as already mentioned there are some better pictures of the figures to enjoy.
Posted by BigLee at 08:00 9 comments:

Battlefield Tours: Are they of value to the wargamer?

Are battlefield tours of value to the wargamer? And what is your favorite?
Posted by BigLee at 17:00 11 comments: 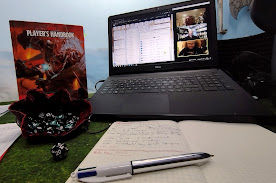 Back when the first Covid Lockdown got going my old roleplaying group decided to get together online to resume playing 5th Edition D&D. We'd all drifted to different parts of the globe making face-to-face gaming difficult, Covid just underlined our inability to get together for games.
Thanks to Zoom we had finally found a way to play again, regardless of where in the world we found ourselves. Almost immediately we fell effortlessly back into our bi-weekly cycle of games as if nothing had happened. My old schoolmate Andrew took the reins as DM this time around and for the last two years, we have been playing a long-running campaign set in the dark and horror-filled domain of Ravenloft. A couple of nights ago we had our 50th game of this particular campaign, and sure enough, it didn't disappoint. We have brokered a deal with the probably corrupt town guard; won over the trust of some locals; learned a few of the town's mysteries; and fought a vampire which had killed the blacksmith. 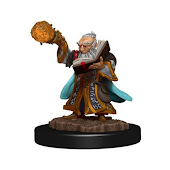 Our characters for this campaign have been nurtured from 1st level, slowly gaining in abilities and power. With each passing game, their personalities are being developed and after two years I feel like I know these characters as real people. In particular, I have come to have an abiding affection for my Gnome Wizard, Brocc Dargal. He is a former reclusive librarian who has been forced into the world and finds he rather likes it. He is still a bit anti-social which has manifested itself as a slightly pyromaniacal penchant for fire spells. His ability to 'blow shit up' has become legendary. Like all the best characters he is deeply flawed and at the same time bravely epic! He has definitely earned his place in my D&D Hall of Fame alongside some of my other favorite characters from 40+ years of D&D.
Posted by BigLee at 17:30 1 comment:

Nature verses Nurture: Are we born Wargamers or is it all down to upbringing?

Are Wargamers born with a predisposition to strategy, tactics, and gaming, or is it entirely down to our upbringing? The significance of Nature versus Nurture has been debated for hundreds of years in science, literature, and film. But does the argument hold true for Wargamers?
Posted by BigLee at 16:00 1 comment:

There's a new(ish) painting technique in town and it's called Slap Chop. But is it new? Is it controversial and is it as innovative as its supporters claim? More importantly, does it have any value as a painting technique for the small-scale historical wargamer?
Posted by BigLee at 17:00 11 comments:

Update from the Operations Room Nov 2022

Looking back at what I got done in October.
Posted by BigLee at 17:30 2 comments:

I have started preparing figures for this year's Analogue Hobbies Painting Challenge which starts in late December. In the process, I found some stuff from last year that apparently didn't get finished in time. These Gallic Chariots and Cavalry had started to be painted but were still a long way from completion.  I guess I must have decided they couldn't be completed by the end of the challenge and put them aside. I can't enter them for this year's competition (that, of course, would be cheating) so instead, I decided to pull my finger out and get them finished...a year after starting them! 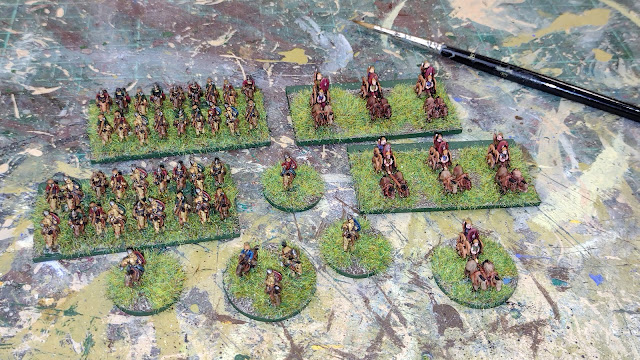 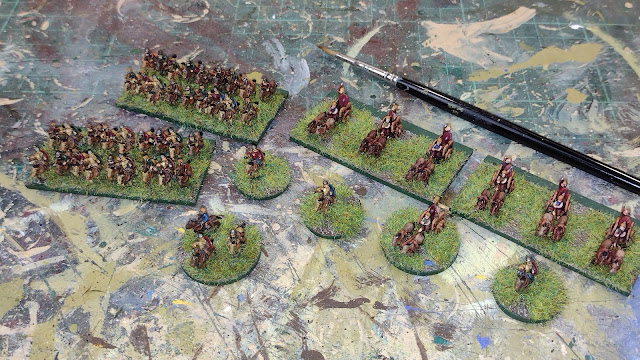 I also painted a few extra mounted Cauari (heroes) and a couple of Corionos and Uellauni (Senior and sub-Generals or "chiefs of battle.") on the larger bases. They aren't my best work but they are good enough to play with and I'm just glad to add them to my current collection of Gauls. I just need to add some labels to the rear of the bases but that will have to wait as my printer has just run out of ink!

Cradle to the Grave

Is there such as thing as being too old to wargamer? And what about being too young? Surely our hobby is suitable for all ages from the Cradle (almost) to the Grave. Personally, I plan on checking out at a very old age with either a dice, a brush, or a mini in my hands.
Posted by BigLee at 16:30 2 comments: