Paytest of What a Tanker! 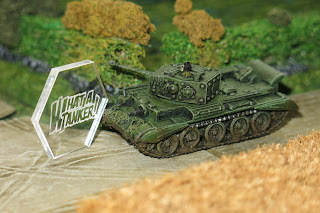 This weekend I finally had a chance to not only thoroughly read the What a Tanker! rules but also play my first game. This was a solo playtest featuring just two tanks and a lot of terrain. Despite selling most (but thankfully not all) of my 15mm WWII stuff a few years ago I kept a lot of the terrain that I had and, combined with my new mat from DeepCut Studios, I was able to quickly throw together an interesting scenario.

For this initial test of the rules the game is set in 1944, deep in the Normandy bocage. The roads here are often hemmed in by steep banks crowned with ancient hedgerows making this terrible tank country. Through this nightmare environment a lone Cromwell tank stalks a Panzer Mk IV in the fields surrounding a deserted french farmhouse.


At first the game seemed to go quite slowly as each tank pounded away at the other with little effect. But as soon as one tank was able to get a side shot in the game changed completely and from that point onward the Panzer was hounded to its death. The rules are quick to understand and the game play was fast, varied and exciting. I can easily see how multi tank, multi player games could be great fun and I'd quite like to take this to the Shed-o-War to see what the other Rejects think of it.
Posted by BigLee at 17:53 15 comments:

Email ThisBlogThis!Share to TwitterShare to FacebookShare to Pinterest
Labels: 15mm, Tanks, TooFatLardies, What a Tanker!

A couple of weeks ago, while at Salute, I picked up a copy of What a Tanker! by TooFatLardies. I had a long chat with the guys before the show opened and was impressed with the simplicity of the rules that conceal a whole sub level of subtlety and nuance that make this look like a very interesting and fun game to play. My initial intention was to play using my 6mm tanks (and I may still do that) but for a first play test I decided to break out some of my 15mm tanks and terrain. Unfortunately I sold most of my vehicle collection a few years ago, keeping back a selection of models for display... only one of which had a rotatable turret. After a bit of thought I found this Cromwell in my cupboard of shame and last night I gave it a very quick paint job. 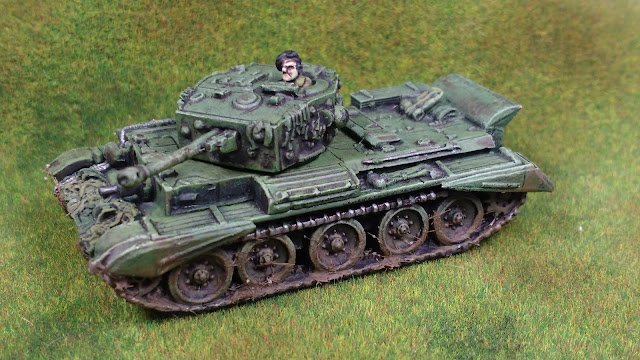 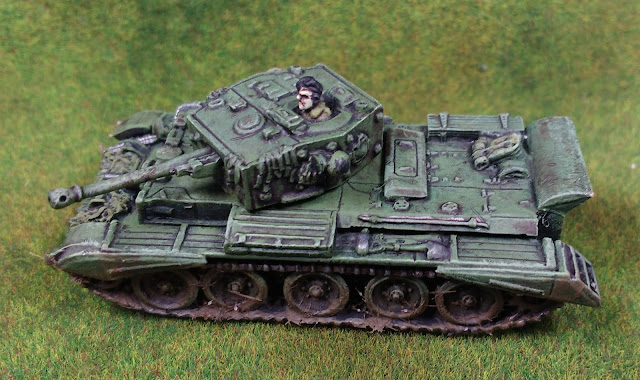 The whole model took less than an hour to paint, with a little overnight drying and a quick coat of varnish this morning. The turret is magnetised so I can rotate it and I even added some textured 'mud' to the tracks and lower hull.

Now it's ready for action against my only other 'game ready' tank, a Panzer IV H, so I had better finish reading the rules!
Posted by BigLee at 13:38 6 comments:

Last year I made up a load of casualty markers for my games. I made several sets for single dice, sets of two and three, but I soon realised I needed a few more of the single frames. So while I was at Salute I picked up some more of the little MDF single's (made by Minibits) for a couple of quid. I've now expanded my existing set of single dice frames so I have more than enough for my own gaming needs. I also decided to make some extra frames for Postie, as a small thank you for all the games he runs for the Rejects.

We often use rule-sets that employ small 5 mm dice as casualty counters and they are forever being knocked over (sometimes even accidentally!) when we move units around. I've done a set of 50 for the shed-o-war which should be ample for pretty much any size game we play in future.
Posted by BigLee at 18:06 5 comments:

I need to cheer myself up and paint something that isn't large, flat and vertical. The much promised Post-Challenge decorating spree continues and I'm starting to get a little tired of the mess the house is in. I can barely see my painting desk behind the piles of furniture, boxes and coats that belong in the hall. And as for finding time to 'play' with my Salute purchases, they are still in the shopping bag I brought back with me.

I'm putting a brave face on it for the wife (I do owe her for her patience during the Challenge) but I definitely need to wield a smaller brush, and soon. One more room needs my tender attention before I'm home free, although I suspect my household DIY 'to-do' list is covertly being added too whenever I'm not looking.

Another huge success is the only way I can describe Salute 2018. This is the biggest one day wargames event in the UK and its hard not to be impressed by the size, diversity and shear 'buzz' of this annual wargame show. It may lack the personal touch of smaller local shows, but as a showcase of new products and innovations and for sheer eye candy it is, IMHO, unsurpassed. In short Salute is best described as a wargaming extravaganza and one that I think every hobbyist should visit at least once in their lifetime. There will be more commentary on the show at the end of this post but for now lets see some pictures!

I usually approach Salute with a clear plan of action and this year was no exception. I always get myself a large map of the show layout and highlight the stands and games that I simply must visit. Combined with a well defined shopping list this plan never stands up to its first contact with the enemy; that widespread gamer malady known as 'shinyitus'. This year was no exception and my swag bag was full of unplanned purchases by the end of the day.

One of my main delights in a show as large as Salute is exploring the many display and demo games. Don't get me wrong its good to explore the traders but its the eye-candy that really draws me to this event year after year. My camera gets a proper work out every year and this time I seemed to have been in a bit of a frenzy shooting over 600 pictures before the day had ended. I've now edited and trimmed as much as possible and begun the massive task of labelling every picture. As usual some tables were better labelled than others and there were a lot of Trader demo games that I struggled to identify in my pictures. If there are any errors please let me know.


Salute has changed a lot over the years, growing to be the biggest one day wargames event in the UK. This gives it a unique audience and appeal that makes this very different from other events (or so I'm told, I haven't visited them all...yet!). I know Salute divides opinion with plenty of wargamers who either love it or loath it - sort of like Marmite! Personally I love it but I think the key to my appreciation is that I attend knowing full well that its not like any other UK show. The size of the event does mean that "gamer's of a certain age" (or build) struggle to get around. I spoke to several people who agreed with me that to a large extent the show is more of a 'games expo' than a true wargames show. There are more companies running demo's of new games or kickstarters than there are clubs these days (or so it felt). I enjoy this aspect but I do recognise that it makes the show feel very different from its smaller cousins.

The lighting is without question pretty bad. I think it was worse than last year but maybe its just my dodgy eyesight. It certainly felt very dim inside the hall and it made taking pictures without a flash very hard. Having said that I have attended plenty of smaller shows where the lighting is just as poor so its not unique. It has to be said though that considering how expensive it is to attend the show (especially if you have to park a car) it would be nice if the illumination was better.

One of the things I notes this year was the proliferation of MDF and 3D printed models available to wargamers. These technologies have come on leaps and bounds in recent years and every season I am amazed at what is possible. Having said that the selection of 3D printed models is also increasingly impressive and it is only a matter of time before the costs of this option bring the technology into the hands of more and more wargamers.

I spoke to several traders about how the day was proceeding and got mixed messages. Some felt they were having a poor day while others were clearly overrun with customers. The show certainly felt as busy as usual and my 'impression' was of a lot of trading taking place, but that's just my sense of the day.

I'd love to hear your own views on the show so please leave some comments below.
Posted by BigLee at 14:07 27 comments: