Another historical weekend away

I've been away on yet another short weekend trip, this time down to 'Hells Corner' in sunny Kent. We had to dodge a few showers but on the whole, the weather was pretty good and we had a great weekend. We have been taking full advantage of our English Heritage membership, re-visiting sites we haven't been to in several years. The weekend started with a relatively short trip over to Rochester and from there we travelled on to Dover Castle and the coastline of the Cinque Ports.

Then on Monday, we drove down to Dover for a WWII weekend inside arguably Britains most important castle. Dover castle had a special WWII themed event this weekend so we decided to make the relatively short trip down to the coast and stay overnight. This corner of Kent was literally on the front lines in the second world war, with German-occupied France clearly visible across the Channel. Dover itself was the target of many air raids and was even under direct shellfire from German railways guns and coastal batteries. Over 10000 properties in the city were damaged during the war with the loss of 216 civilians.

The next day we headed off to Walmer Castle, a 16th Century castle built by Henry VIII as part of the defence of the Cinque Ports. I wanted to come here as this was for a time the home of the Duke of Wellington until his death in 1852. There is an extensive collection of memorabilia related to his tenure, including his Death Mask and items relating to his funeral. Unfortunately, photography inside the building is not allowed.

I'm still feeling the after-effects of all the walking we did over the weekend but when the weather is good, Britain is a beautify place to holiday and take in some heritage.
Posted by BigLee at 07:30 1 comment:

Way back in April I headed off to Salute 2019 with a very long shopping list. One of the items I wanted was a set of 15mm gravestones to accompany a church I have for my Normandy setup. I wanted to get the MDF 4Ground ones but by the time I got to their stand they had sold out. Thankfully though they offered to order them for me and send post free, so I paid for them and tucked the receipt into my wallet... and then promptly forgot all about it. Then last week I received an email from an unknown email address with the above-mentioned subject line and for a moment several thoughts passed through my head, including "This is a rather unusual spam email...", "The local undertakers have taken marketing to a new level...", "My wife has bought me a plot and not told me about it!!",  and finally (as the penny dropped) "Hang on a minute, didn't I buy something at Salute...".

A few days later a little package arrived in the post and settled the question, it was my order from 4Ground, a little later than expected but non-the-less welcome. So I have worked up the gravestones and made five bases that can be arranged however I need them around my Church building. 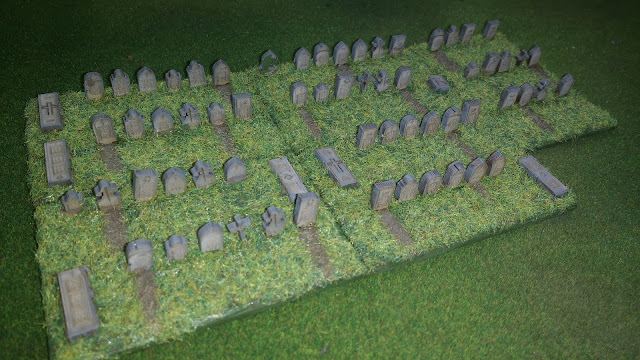 Although these come 'ready painted' I needed to give them a lick of grey to cover the burned MDF edges and make the stones look a little more realistic. There are several fresh plots...maybe one of them is mine and the wife hasn't told me yet. I wonder if this has anything to do with the Insurance documents she had me sign a few weeks ago?!*

*Incidentally our Will's give everything to the surviving partner, so technically she's the half owner of a very impressive Lead Mountain. Strangely she didn't look terribly impressed when I pointed this out to her.
Posted by BigLee at 07:51 4 comments: 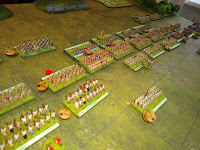 I will come back to this and have a second go at it in a few weeks.
Posted by BigLee at 09:34 8 comments:

Following on from the Hills I made last week I have been trying to make a selection of different terrain types that can be used in my 6mm games using the To the Strongest! ruleset by Simon Miller. For these small terrain item's I have used 70mm rounded edge bases as these fit just inside the 75mm squares on the game mat I am using. 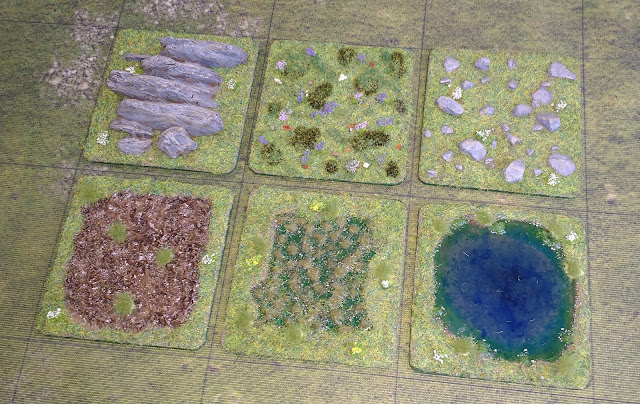 Between these, the hills I made last week, and the rivers I bought some time ago, I now have quite a lot of suitable scenery for my TtS! games. Now I just need to get on and play some more games!
Posted by BigLee at 07:30 5 comments:

I've been working on some more terrain items, this time specifically for playing 6mm wargames using the To the Strongest! rules. My game mat is divided into a 3" grid so when I'm building terrain elements for use with these rules I try to make them fit comfortable inside those dimensions or multiples thereof. My current set of hills is rather limited, especially now that I have expanded my games surface to 3x4', so I have started to build a set of extra hills that allow for a bit more variety.

The following pictures illustrate the technique I have used and show some of the variety of hills I have managed to create using it.

One model included a depression to add a marshy lake. I painted the bed of the lake with darker colours in the centre and then used a thin layer of Vallejo Liquid Water. This self-leveling liquid takes several hours to set so I took the time to partially submerge grass tufts in it to make the end result look like a marsh.

With my old hills I now have more than enough for my modest 3x4' table.
Posted by BigLee at 07:30 13 comments: 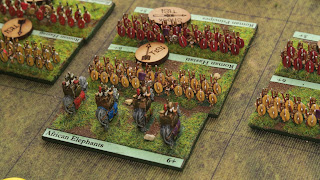 Tuesday was my day off and I decided to make the most of the free time to play a solo game with my Punic War forces. I have recently been reorganising my Carthaginian army and during the painting challenge, I added several Gaul and Iberian units to the collection so it was high time these were played with. I also recently bought a new gridded game mat from DeepCut Studios and this was an excellent opportunity to christen it in battle.

The Setup
This game is a fictional battle set on the banks of the Secutium River somewhere in northern Italy. Both armies came in at 200 points apiece so this was going to be a relatively large game and more importantly it was going to be played solo. To add a certain level of 'automation' to my non-existent opponent controlling the Romans I decided to randomise the deployment of the cavalry command so it could have been on either the left or right flank. I also diced to determine the level of 'aggression' the Roman army would show in their actions. Would they be cautious and stand on the defensive; move forward timidly or press forward in a full-throated attack? After that, it felt like most of the Roman actions would be determined by the circumstances on the ground; ie who was attacking them, who was the priority target for missiles etc. Whenever it felt like there was a split decision I rolled dice to pick an action but for most of the game, the Romans were reacting to the Carthaginian plan.

As before I have used 10 sided dice rather than cards to determine activation, partly because I prefer dice but also because at this scale there just isn't space on the games table for playing cards.

Despite playing solo I was able to get this whole game completed in about 2 hours. I set up the night before to save a little time but the rules play fast and I was comfortably able to complete the game and get everything back in their storage units by lunchtime. I need to recheck some of the rules before I play again because I'm sure I got a couple of things wrong. I really need to play more often and I'm determined to do just that over coming months.
Posted by BigLee at 07:14 14 comments:

All the Kings Horses at Audley End

On Monday we visited Audley End near Saffron Walden in Essex. We've been here plenty of times before but not for several years. This weekend they were hosting a special event "All the Kings Horses" for a Restoration period reenactment. The theme is 1670 and King Charles II has recently purchased Audley End and is hosting a horse race on his way Newmarket. The Kings Cavaliers show off their exceptional horsemanship while the Merry Monarch indulges in the fun of the Restoration period.

Its a pity the weather was a bit inclement on Monday otherwise we would have stayed longer.
Posted by BigLee at 13:27 5 comments: