A Wargamer's Guide to the Anglo Zulu War 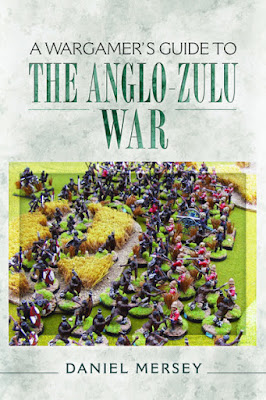 A few weeks ago I began to give serious thought to my next big project, the Anglo Zulu War. The first book I bought was Daniel Mersey's Wargamer's Guide to The Anglo Zulu War published by Pen and Sword Publishing. I wanted to begin this project with a broad overview of the period, the forces involved and the type of actions that this conflict brought up (its not all Hollywood after all!). This book fulfilled that brief completely.

The book is divided into seven chapters starting with an overview of the conflicts origins, its stuttering progress, major actions and inevitable conclusion. There are better history's of the war out there but this is meant as an overview and in that respect it does a very clear job in setting the scene. This is followed by a review of the armies, their organisation and the equipment used. Again this is necessarily brief but pretty concise and I really felt that it was a good place to start for the beginner in this period.

Now we start to get to the meat of this book and the next two chapters focus on the key battles of the war and how to wargame the campaign. As well as the big set piece battles and encounters like Isandlwana and Rorke's Drift there were many much smaller skirmishes that offer a wealth of options for the wargamer. I'm still deciding at what level I want to model my troops so I found this section very useful. After this the next chapter looks at some of the rule sets available. Its not comprehensive but it does cover many of the main sets available commercially and as free downloads. I found this very useful and its given me some ideas of rules I'd like to explore. 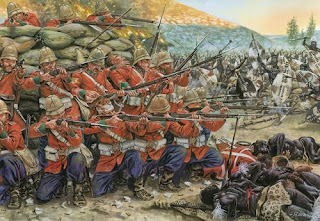 The next section reviews some of the miniature manufacturers for this period. For me this was the least useful section, I want to stick with 6mm so I'm limited to just a couple of manufacturers. But for those that have yet to decide this section does give a pretty comprehensive review of what is available out there in other scales. I suspect though that most wargamers will come to this period already with certain ranges in mind so I'm not sure how useful this section will be. The final chapter however focuses on scenarios that could be played and I felt this was quite useful as it helped me have some idea of what would work at different scales and what would make for interesting games.

I found the writing very engaging and easy to follow. There is a lot of information in this book but it never feels like wading through a text book. I did come away from it with a lot of things to think about and in that respect its proved to be a pretty good starting point for my Zulu war project.
Posted by BigLee at 21:00 1 comment:

The Battle of Klyastitsy 30th July1812

The messenger was dispatched and from every corner of Kent (and one part of Essex) we came. The Rejects gathered in the Shed of War on Sunday for a game with a difference. We brought the kids with us! Four trainee wargamers joined regular Rejects Lee, Ray and Richard to play a Napoleonic battle between the French and the Russians in 1812. The game went very well and by the end of the day I think us old Grognards were about ready to hang up our spurs (and put away the dice) permanently as the young apprentices outperformed us in every respect.

The Setup
The Battle of Klyastitsy (also called the Battle of Yakubovo) was a series of engagements that took place as the French advanced on St Petersburg. The game starts as both armies head towards each other. The Russians appear to outnumber the French but they are facing superior quality troops and commanders determined to break through. A couple of units of mounted Cossack's are hidden in the woods on the french flank but they will probably be more of an annoyance to the french than a real threat. It all depends of the timing of their appearance...

Analysis
Wow. Those kids sure can throw dice! On the French side young James was a sight to behold. His dice throwing was almost supernatural! And on the Russian side my Padawan Emily did amazing things with her Cossack's. Nobody has seen Cossack cavalry perform as well as this in any previous game.

The Russian plan was simply to hold fast and defend, bringing our guns up and into action as fast as possible. We hoped the Cossack's would tip the balance on the right flank but we never expected the result we got. The French sensibly planned on an all out frontal assault and to be fair is came close to paying dividends. The kids all played very well and all seemed to enjoy the game. Their dice rolling skills were simply uncanny and it made us old farts consider just give up wargaming and taking up fishing or something.
Posted by BigLee at 08:01 6 comments:

Upgraded Storage for my Miniatures 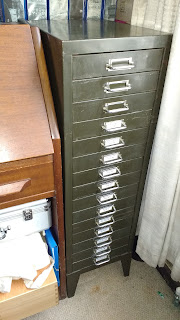 I acquired a new piece of furniture for my future games room (the one I dream about getting at some unspecified time far in the future!). This all metal file cabinet has 15 drawers and is ideal for storing my growing 6mm collections. I already magnetise the bases as my carry boxes are lined with magnetic sheets so moving most of them to the new cabinet was easy and they adhere quite nicely to the metal trays. I had a few more recent models that needed magnetic strip added to the bases and its taken a few days to organise and label the draws appropriately.

Each drawer slides fully out if needed making it easy to move models to the games table. The only downside, I've almost filled  the cabinet already! I only have a few empty drawers remaining so I guess I'll just have to keep my eyes peeled for a matching companion. This type of unit also comes in a 30 drawer version (with shallower trays) so I may look out for one of those. There a few second hand furniture dealers nearby I can visit and of course the internet is bound to throw up examples for sale eventually. I have seen a couple for sale but they were too far away to collect.

One word of advice if you consider the same option, use decent quality magnetic strip. Some of the stuff I had was so magnetically weak it was next to useless. Luckily I had some better quality material and was able to use that and it makes all the difference. 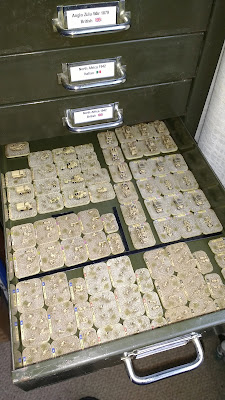 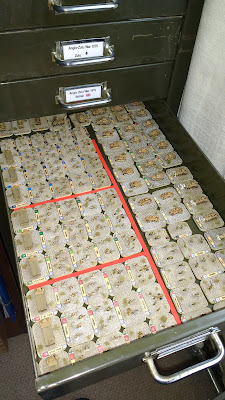 It didn't take long for me to fill most of the drawers, and this is just my 6mm collection.

OK, maybe not thousands but I couldn't resist. I'm kicking off my Zulu Wars project with some serious reading care of Pen and Sword Publishing. The Rejects prize for wining Best Game at Broadside was a £100 voucher and as I supplied the game and models the rest of the team insisted I get the prize (far be it for me to complain!). It couldn't have come at a better time and will kick start my new project. So here's what I bought... 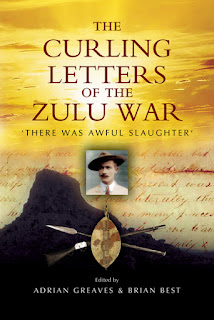 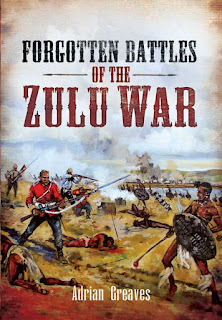 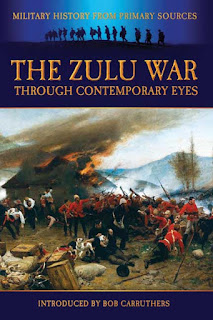 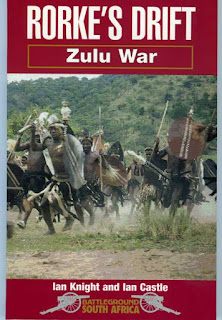 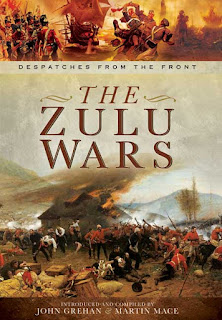 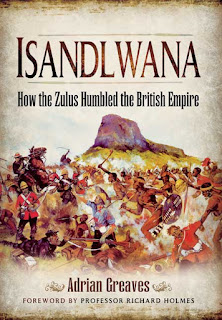 In addition my daughters treated me to an Amazon voucher for Father Day last week and I treated myself to several Osprey books to really round off my new Zulu Wars library. Combined with Daniel Mersey's book A Wargamers Guide to the Anglo Zulu War which I bought a few weeks ago I have a lot of reading ahead of me. 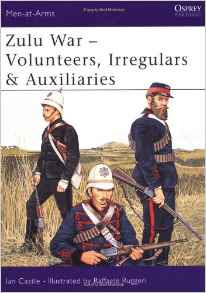 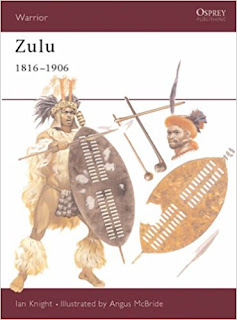 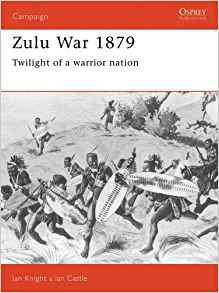 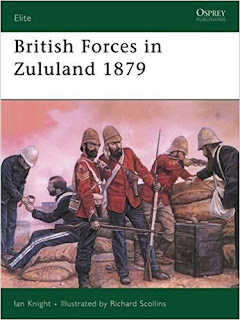 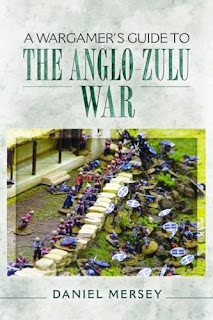 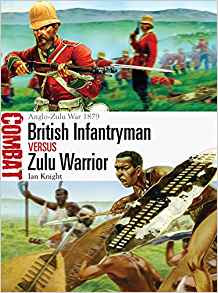 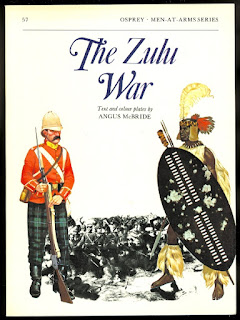 I've just finished reading Daniel Mersey's book and I'll be posting a review in a couple of days. I have a lot more reading to do before I settle on a set of rules or start buying miniatures but I'm determined to take my time and 'do this right'.
Posted by BigLee at 17:30 4 comments: