The old adage that Wargamers only do it Horizontally does not need to remain true. Some of the best demo games use various items of terrain to create height and add a third dimension to the standard wargames table. This video discusses a few of the most common ways to add height to an otherwise flat battlefield.
Posted by BigLee at 12:00 1 comment:

Could roleplaying games be an underappreciated route into wargaming for young gamers? Games such as D&D are where I cut my teeth on cooperative gaming, painting, worldbuilding and design. I went on to play bigger and bigger games until the inevitable happened and I turned to Wargaming.
Posted by BigLee at 12:00 No comments: 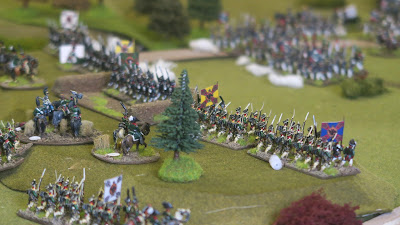 Analysis
Well, as a player on the Russian side you would expect me to say how our plan worked perfectly and the French, full of overconfidence, walked right into our trap. Not once did I hear them speculate if anything was behind the hills and they seemed to completely ignore the redoubts that were their objectives. The Russian forces looked numerous but were weak, and most of our cavalry were Cossacks so pretty much only good for counterstriking and ambush attacks. Richard was an excellent commander, and Mark an I were glad to follow his lead, especially as it game as a win to start the year off with.
Posted by BigLee at 13:04 2 comments:

The Next Generation: Barriers to Entry of Wargaming

The Greying of the Hobby has been discussed endlessly by many an Old Grognard. But our theories on why some young players aren't taking up Wargaming may be different from the Barriers to Entry identified by the next generation themselves.
Posted by BigLee at 12:00 2 comments:

Become a Better General (and a better Wargamer)

Is being a successful tabletop general essential to being a good wargamer? Is it possible to enjoy the hobby even if you are an appalling commander? And is it possible to train yourself to be a better general?
Posted by BigLee at 12:00 1 comment:

The first two weeks of the Analogue Hobbies Painting Challenge are done and I thought now would be a good time for an update on my progress so far, and how I keep track of my target as the event unfolds.
Posted by BigLee at 08:00 No comments:

A big thank you to all the viewers that have taken my little youtube channel Miniature Adventures to 1000 Subscribers. I'm quite blown away by the support and the fact that so many people want to listen to my silly ramblings! It goes without saying that I hope to continue growing the channel over the coming year and while I have some ideas of what I want to talk about I'm always open to suggestions.
Thanks again to everyone that has subscribed (and don't forget the Bell Notification Icon for updates when I post new content).
Posted by BigLee at 12:02 1 comment:

Well, we survived 2021, so maybe it's time to change things for the better in 2022. Time for some New Year Resolutions. But how can we ensure that these are not short-lived plans and instead look forward to ticking off resolutions as completed?
Posted by BigLee at 12:00 2 comments: