Regular readers will know that I have been working on a 6mm North Africa 1942 campaign for several months now. From the start I decided that I wanted to have a go at using the 15mm Flames of War rules for these games but I wasn't sure if they would work with micro armour. Now that I have been able to play-test a few scenarios I am confident that FOW actually works quite well with smaller scale figures and I thought it worthwhile sharing my experiences on 'converting' the rules for 6mm Wargaming.

Why use FOW?
I'm one of those 'odd' gamers that actually find it hard to read and learn rules alone and as I would almost certainly be working on this new project 'solo' the idea of also getting to grips with a completely new set of rules was pretty daunting. Using FOW with Micro Armour therefore appealed to me from the start because I was already familiar with these rules for my Normandy project in 15mm. So when I saw the FOW rules being used for a 6mm game at SELWG last year (the Operation Deadstick demo game run by the Maidstone Wargames Society) I felt confident that I could also adapt the rules for my North Africa project.

My aim from the start has been to keep any 'house' rule changes minimal in order to keep the essence of the game intact. I have also tried to adopt the K.I.S.S. (keep it simple stupid!) approach so when I think something is overly complicated I drop it. What I have found is that FOW adapts well to the smaller scale models and that I haven't had to make any significant changes for the game to be playable, fun and realistic. Over the next few weeks I will be posting a series of articles taking different aspects of the FoW rules and discussing my thoughts and ideas. This is all very much a work in progress and I would very much appreciate any ideas or suggestions from readers, as well as any problems or mistakes you think need to be highlighted.

I have actually had these articles partially written for some time but its taken me a long time to play-test the rules and capture the pictures I wanted to illustrate the articles. I'll also admit that the idea of being presumptuous enough to say 'this is how to convert the rules' to a wider audience has been quite daunting. But I have decided to publish and be damned and hopefully garner some useful advice along the way from older and more experienced Grognards. All suggestions will be considered and hopefully be put to good use as this project develops.

Basing
I have used the same basing protocols for 6mm that I would have used for 15mm, the only difference being that I have used smaller bases. So Instead of putting infantry and vehicle teams on a FOW Medium Base I am using Small bases instead. For Command teams I cut a small base in half. The proportions of these bases obviously don't match their larger cousins but so long as all teams are based to the same formula I don't think it makes any real difference to the game. 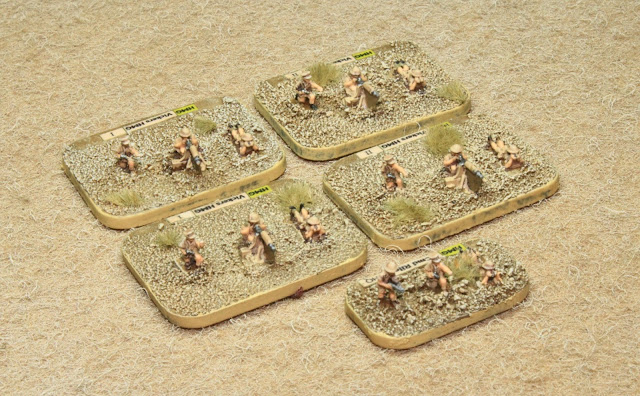 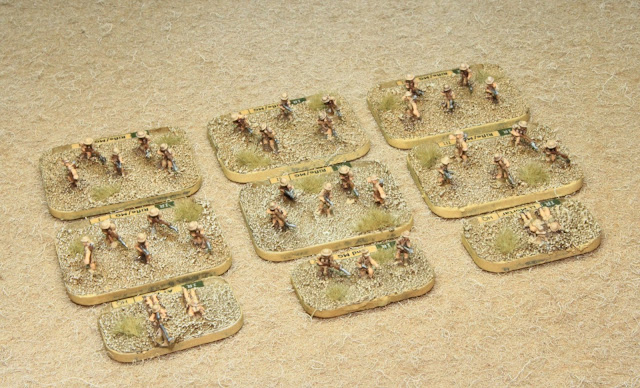 I am also sticking with the number of figures per base that are shown in the FOW Army lists. The proportions of the bases to models at 6mm is slightly larger than at 15mm but I think this makes the finished stands look less cluttered, especially when putting together something like a five figure rifle team. The 15mm equivalent has individual figures that are almost shoulder to shoulder and these always look far too closely bunched in my opinion. 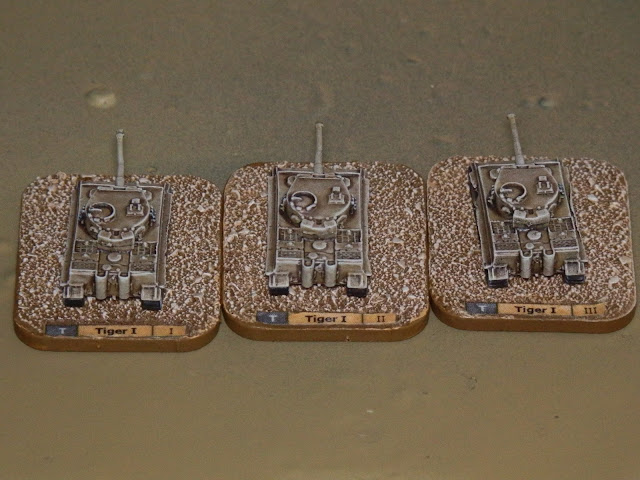 Vehicles are also much smaller in proportion to their bases and even if you place a platoon of tanks side by side there is still some space between the models (no axle to axle formations), thereby reducing the 'FoW Parking Lot' effect.  Even large tanks like these tigers (above) have plenty of room on the base. Another advantage of basing tanks is that it affords some protection for flimsy barrels and enables vehicles to be moved by handling the base rather than the model. A further advantage for me is that I have room to add a unit label to the base, something that I think is important when playing with large formations. 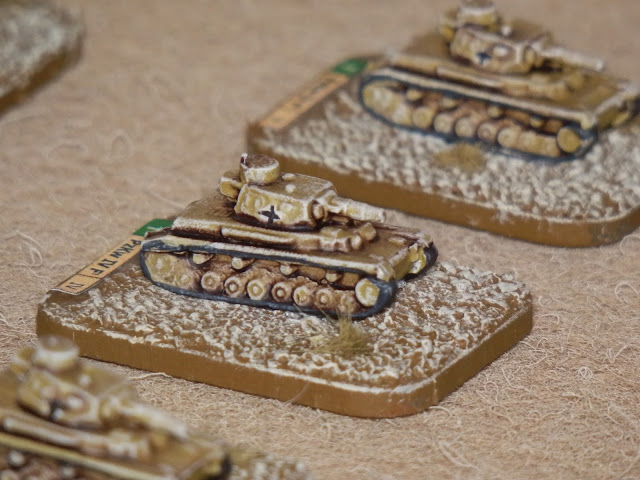 My general rule of thumb when basing is that so long as all models are based using the same conventions there is no undue advantage or disadvantage conferred to any one side. I'm sure someone with a better understanding of mathematics will come along and prove I have just 'broken' the FOW system but in my play-testing I haven't encountered any issues.

The next article will discuss the terrain rules for 6mm FOW battles and look at some of the benefits and pitfalls of using these rules with micro armour and infantry. Hopefully I'll have this finished and properly illustrated to post next week. In the meantime please feel free to leave any comments, suggestions and ideas. Thanks!
Posted by BigLee at 11:53 11 comments:

My two week 'stay-cation' has finally come to an end and I am now back at work for a bit of a rest! Our last big day out was on Monday - a public holiday here in the UK - with a visit to the Military Odyssey show at the Kent County Showground in Detling. I didn't go to this event last year and its been a couple of years since the rest of the family went so we were all looking forward to seeing how this years event shaped up. Fortunately the ground had dried up after the monsoon like rain we had on Saturday and the sun came out for a glorious last day of my vacation.

The show seemed a little quieter this year with fewer reenactors and traders present, although that may just have been a reaction to the terrible weather on Saturday. I was still able to pick up a couple of books and we got round most of the displays and trade stands by lunchtime, meaning we had the whole afternoon to sit by the main arena and watch some excellent battle displays. As always I went camera in hand and here are a selection of pictures from this years show.

The good weather on Monday made this a very enjoyable day combining a little bit of shopping, some activities for the kids and the battle displays in the afternoon. All in all not a bad way to end my two weeks off work.
Posted by BigLee at 06:32 12 comments:

The Battle of Hollands Farm

Posties Rejects gathered on Saturday to play an ACW game using the Fire and Fury Rules. We were joined by MiniMike from the Netherlands who was over in the UK on a holiday. The weather outside was awful with monsoon like conditions sweeping across the South East of England but for those of us inside the weather was unimportant. All that mattered was the battle, which would turn into a fight to the death.

Setting the Scene - The Battle of Hollands Farm, 2nd May 1863
Union forces are pushing south on the Confederate far right flank along the east coast. Reynolds, the Union Commanding officer, has orders to build a series of coastal fortifications as he advances to help in the fight against contraband reaching the south, which would include arms and ammunition from Britain and various other factions with Southern sympathies.

Meanwhile General Longstreet the Confederate commander has been dispatched to halt the Union advance and capture or destroy Fort Hooker (named in honour of the previous commander of the Potomac who was recently replaced by General Meade) which is currently under construction.

The game begins with both armies advancing towards each other just South of Fort Hooker which is just off the table on the coast behind the Union left Flank. The Union must defeat Longstreet in a pitched battle otherwise the army will be forced to retreat, thus abandoning Fort Hooker to the Rebs. All the South are eagerly awaiting news of a victory. If the South loose this fight more Southern soil will be captured by the blue bellies and Southern honor will be insulted.

Analysis
By the end of the game both sides had taken a mauling but both I and my fellow Union player Richard were convinced it was a resounding confederate victory. When the points were added up they had indeed won but much more narrowly than we had anticipated.

This is counted as a Confederate Minor Victory but really they had won the ground and effective control of the coast with reserves feeding into the front line. The Union position was untenable and if the game had progressed a few more turns we would have been forced to retreat no matter how much we fought the inevitable. I think we gave the Confederates a bloody nose, but ultimately my uncannily poor dice rolling and their domination of the coast proved too much. Kudos has to go to MiniMike and Dave who both fought tenaciously and pressed their advantage throughout the battle. Well done lads.

So once again my dice rolling was utterly utterly awful. I still enjoyed the game but I am beginning to believe I am cursed. Maybe if I could roll the dice without touching them I may have better luck.... nah, I don't believe that either!
Posted by BigLee at 06:30 23 comments:

War Games at the Museum of Childhood

The family 'stay-cation' rumbles onward and this week we have been focusing on exploiting the good weather with plenty of outdoor activities and a few trips to the beach. But yesterday we had a busy day with a trip to the Theatre in the morning followed by a visit to the Museum of Childhood in Bethnal Green in the afternoon. I have been wanting to revisit this great little museum for a while because they are currently running a special exhibition called War Games which explores the sometimes complex relationship between war and children's play. It contains a wide and interesting range of toys that have been influenced by warfare from 1800 to the present day, included a few that have a special place in my past (you know your getting old when your childhood toys appear in a museum!).

I shot a load of photo's as usual and here is a small selection of my pictures to give a flavor of what to expect.

I went with both my kids in tow and I'd recommend that if you do intend on visiting you need to take a kid along or you'll look a bit strange walking around the rest of the museum alone! If you get a chance this exhibition is well worth a visit.
Posted by BigLee at 07:30 8 comments: