Last weekend I had my second game of the year over at Reject HQ, Posties Shed-O-War, and the result was very close and very enjoyable. Stuart decided to recreate a historical battle from the Anglo Zulu War and chose one that would bring out a significant portion of his vast Zulu War collection of figures. Once again the young Padawan joined us for the game and this time she found herself alone commanding the British while myself and Surjit commanded the Zulu's against her.

The Setup
After the disaster at Hlobane, Colonel Evelyn Wood prepared to resist an attack by the entire Zulu impi of over 20,000. Many of the Zulu regiments were veterans of Isandlewana and Hlobane and were armed with rifles taken from British dead.  The defences at Khambula however were strong with laagered waggons, parapets and trenches on high ground overlooking clear lines of fire.

Well after that battle I am tempted to hang up my dice bag for good! And as for the Padawan, I'll have to stop calling her that from now on. This so called trainee wargamer saw off two members of the Rejects, with hardly a wrong move made. Her dice rolling can only be described as phenomenal. The British guns should hit their targets roughly 50% of the time but her average through the game had to be well into the 70% range, and then she started rolling for damage...oh my.

A very well deserved win for the British in an exciting and thoroughly enjoyable game that closely mirrored historical events (the Battle of Khambula was a turning point for the British).
Posted by BigLee at 16:26 3 comments:

My next regiment of Zulu's is the umCijo ("the sharp pointed") and fought as part of the central "chest" at Isandlwana. This is an unmarried regiment, hence the black shields, made up of warriors with an average age of about 28. It Isandlwana the umCijo were very keen and actually launched an attack prematurely which had to be brought under control. 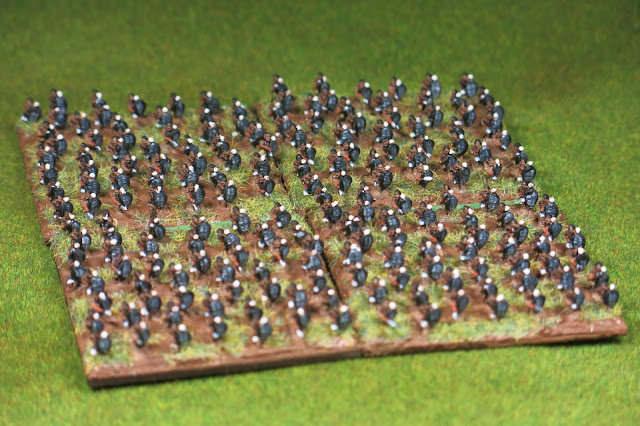 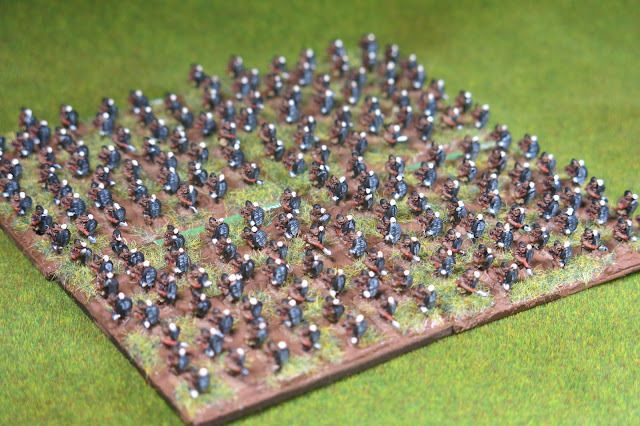 The leader of the regiment Mkhosana kaMvundlana then had to get them going again and keep them moving after their initial assault was stalled by British volley fire. He was subsequently killed in the charge but the umCijo were instrumental in driving the British back to camp, precipitating their collapse. The umCijo also fought at Khambula and at Gingindlovu so they will see plenty of action on the table top. 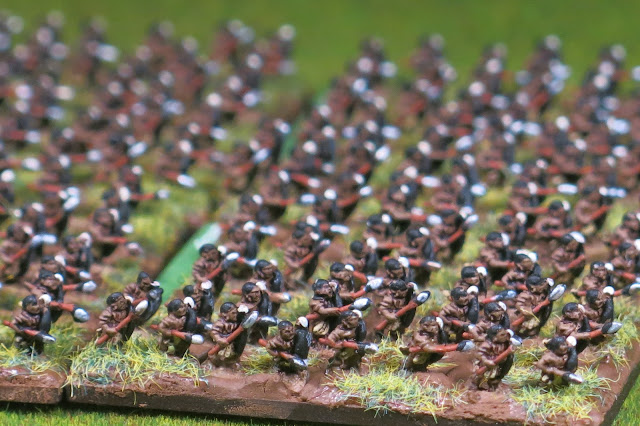 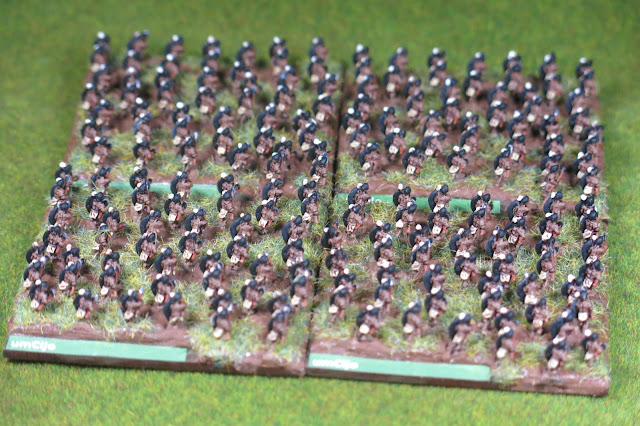 I'm rather pleased with these models as I 'discovered' a new technique for painting them. With all 6mm figures I rely heavily on the use of ink washes to add shading and depth to the base coated figures. Baccus Zulu shields have a series of grooves in the surface for the straps that hold the central shaft and rather than hand paint these straps on every shield I use ink washes to bring out the detail. For units with white shields a brown ink wash shows up the straps on the shields really well but for units with black shields I have struggled to do the contrasting white straps. For these figures I experimented with a 'white' wash, something that until now I didn't think was possible. I used Vallejo Thinner Medium in the ratio 5 parts thinner to 1 of white paint. The resultant thin 'wash' flows into the grooves on the Zulu shields where it concentrates the white paint enough to leave a clear white line but is thin enough that it leaves little or no white residue on the rest of the black shields. 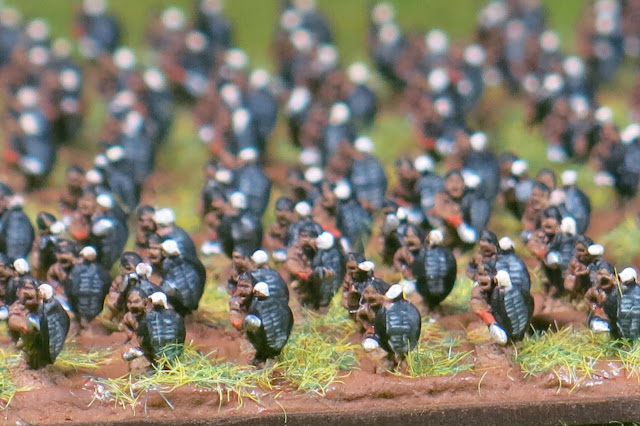 These are the last of the Zulu's for a few weeks because I have run out of models! I've ordered some more figures but I don't know when they will arrive, or even if they will be delivered in time to paint before the Challenge ends. I've quickly rearranged my painting plan and I'll start on the British next, hopefully allowing time for more Zulu Regiments towards the end of the Challenge. Whatever happens I'm a happy painter as I am way ahead in terms of progress towards my target. I considered 1000 points a bit ambitious when I set it (considering I paint mostly 6mm) and it now looks like I was being timid!
Posted by BigLee at 18:58 3 comments:

Work towards my target in the Analogue Painting Challenge is progressing very well with my current points total two thirds of the way to the finish line at the end of week five. This was largely helped along by a few days off at Christmas (illness free thankfully) which gave me a chance to get off the blocks quickly. Indeed I've done so well I have run out of Zulu's to paint and have had to order some more! While I wait for them to arrive I have rearranged my painting plan to start on the British a few weeks earlier than originally scheduled. 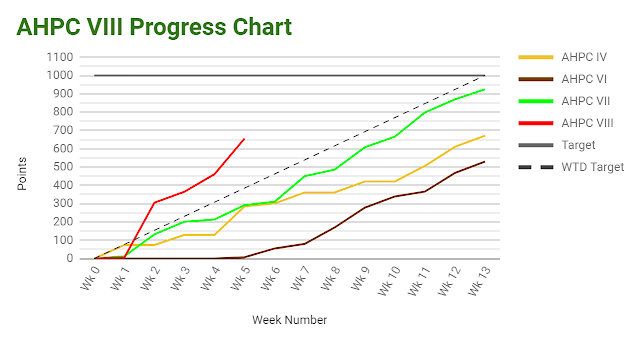 Hopefully the next batch of Zulus will be delivered in time for me to get some more done before the Challenge comes to an end. However even if they don't make it on time I know I have more than enough points worth of figures sitting in the wings to comfortably hit my target... ironic really as back in December I was wondering if I had been a bit over ambitious!
Posted by BigLee at 13:12 8 comments:

The torture that is the Analogue Challenge Bonus rounds continues, and again I had a real struggle to find something suitable for this weeks category. The only model I initially found in my lead mountain was a lovely sculpt from Colonel Bills Belt Fed Girls range but as it was a bit NSFW I decided to try and find something a little more PC! Then by sheer chance I came across this figure by Westwind while browsing through one of my favourite model shops in Rochester. So I present Cedric Hyde from Westwind's Empire of the Dead range. 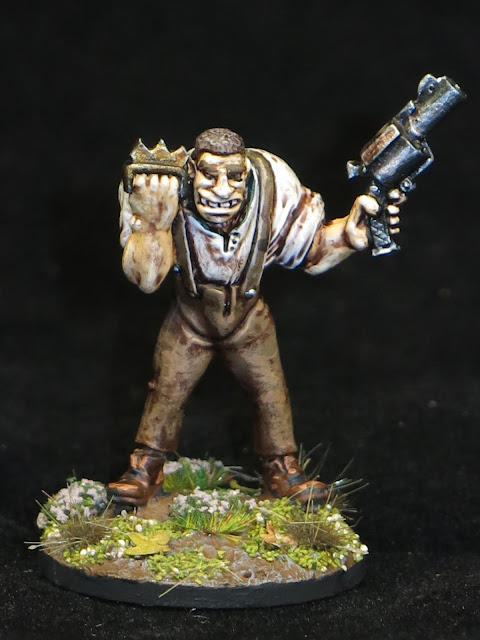 Needless to say the link to the theme is his rather oversized revolver (which reminded me somewhat of the gun wielded by Hellboy). I imagine that targets hit by this impressive hand cannon don't just get large holes in them, they probably explode. If that doesn't count as a BFG I don't know what does. 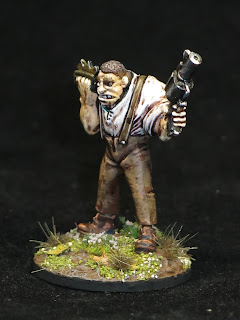 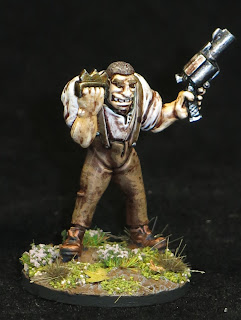 This was harder to paint than its simple lines would suggest. The large smooth surfaces of this figures bulging physique meant that any detail needed to be added by the painter. In other words this needed a bit more skill than I normally exhibit on a 28mm figure! I've given it my best shot and hope you like it.
Posted by BigLee at 13:00 2 comments:

Another Zulu regiment is completed, and this time its the Nokenke Regiment. This regiment fought on the right horn at Isandlwana and after working its way around the British camp eventually joined up with the iGobamakhosi Regiment, sealing the fate of the invaders. The Nokenke we also fought at Khambula later in the year.

I have also turned out some command stands and some Zulu riflemen units. These are small units with very limited firepower and accuracy...but they can still be a nuisance and a poorly aimed bullet can kill just as easily as an aimed one if it hits a target.

I've been a very busy boy this week with the Nokenke regiment consisting 192 figures, there are 32 Command figures and 48 riflemen making a total of 272 figures fora respectable 136 Points. I'm racing towards my target and this should take me well past my half way mark, significantly ahead of schedule. I have one more Zulu regiment to paint and them I'll get started on the British.


As a final 'treat' here's a picture of my Zulu Impi thus far.

Battle of the Two Cabins 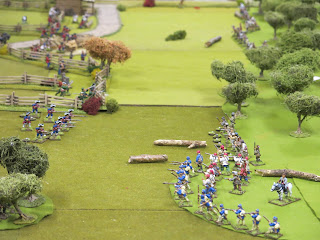 Last weekend the rejects had a French Indian Wars skirmish game in the shed-o-war. Unfortunately some players had to drop out due to illness so in the end it was just myself, Mark and my daughter Emily. She has played several games at Reject HQ but this was her first independent command with an equal share of the French forces and operating as overall commander.

The Setup
The french have snuck up on a British supply column and threaten to cut them off. Dividing their forces into two the Indian Allies attack the head of the column while a combination of Marines, Woodsmen and Militia hit the rear in an attempt to split the British into two separate groups. As the lone British commander I had the advantage that I could handle all my forces together, moving men from one flank to another as appropriate. However that still left me fighting in essence two battles at the same time.


Analysis
This was a tough game to play. The French players kept me fighting two separate battles at each end of the battlefield and I spent a lot of the game carefully moving troops to support the fights at one end or another. When the points were added up the British had scored 111 points while the French had reached just 82 points. So after a long and hard fought game this was declared a British victory, although by the end it did feel something of a Pyrrhic victory.
Posted by BigLee at 08:30 3 comments: