Over the years I have attended a lot of conventions and shows and 2009 has been a particularly bumper year in that regard. Consequently I have started to develop a clear idea of what I like and don't like about demo games at shows. One of my pet dislikes is a lack of ready information for spectators. 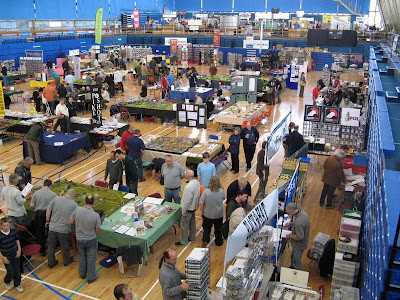 It would be nice to see some of the Demo tables with more information available to visitors. Some of the tables provided information sheets about their games but the majority didn't. This isn't in itself a problem, if you're the sort of person who feels comfortable sparking up a conversation with the guys on the table. But multiply those little conversations by say 30 demo tables and they all start to meld into one confused blur. I guess I feel the problem a little more acutely because I like to come away from a show with pictures as well as miniatures. Trying to figure out who was on what table, what their game was etc can be a bit daunting - even if I process my pictures the same day. As I get older and my mind starts to go I fully expect this problem will get worse!

It would be great if each demo table could provide some sort of handout with basic details on it. This doesn't have to be a double sided A4 colour brochure (although that would be nice). A simple photocopied A5 sheet would be sufficient. Something that would be relatively simple to put together and cheep to reproduce.

So what sort of information would I like to see on the sheet? 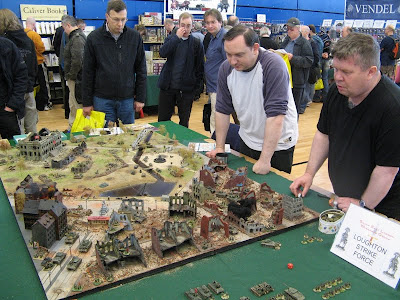 Not every demo or participation table is 'labeled'. Some have a sign up with the club/game details clearly displayed but quite a few have nothing. Now of course you can chat to the guys running the table to find out what you want but I often find it useful when identifying my photographs if I can take at least one picture with the table/club name label included. This is especially true for larger shows where there may be two of three Napoleonic games for instance.

If you're a club and have run Demo's please don't take the views here as a negative criticism. Far from it I fully appreciate the time and effort that goes into planning, preparing and running a demo or participation game. I just think its a pity that all that effort might not get the recognition it deserves in forums & blogs for instance. Keep up the great work guys, but spare a thought for us bloggers with poor memories!
Posted by BigLee at 10:01

Email ThisBlogThis!Share to TwitterShare to FacebookShare to Pinterest
Labels: Conventions