Its that time again. When I come home from a long hard day at work and find my copy of WI has arrived and is sitting on my desk waiting for me. My copy was delivered a little later in the month than normal which may be due to the ongoing (and worsening) postal strike action here in the London region, and now throughout the UK.

This issue of WI focuses on the American War of Independence, a conflict I know relatively little about. I doubt if I'll rush out and buy a load of models to game the period but I can still enjoy the content and scenarios and who knows, maybe I'll be inspired to do some additional reading on this world changing period of history. 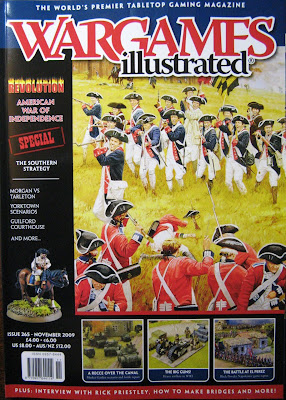 So whats inside the glossy cover of issue 265?

Once again this is a glossy, colourful and well put together magazine with interesting content. It's rare that I will read any magazine cover to cover but this is exactly what I have done with every issue of Wargames Illustrated since its rebirth earlier in the year. It could be argued that making each issue a 'special', might put people off if they don't game the period featured. But for me it has the opposite effect. Concentrating related articles on a given subject helps give a novice like me a chance to get inside the history and get a real flavor for gaming the period featured.