Today is the anniversary of the untimely death of Field Marshal Erwin Rommel. Rommel earned the nickname Wüstenfuchs (Desert Fox) while in command of the Deutsches Afrikakorps. He later went on to command Army Group B in defence of the Normandy Coast prior to D-Day. 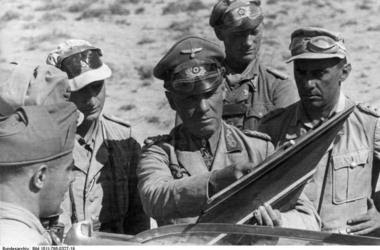 Rommel lent his support to the conspiracy to overthrow Hitler in 1944 but opposed the assassination attempt that took place in July of that year. Rommel feared that Hitler would become a martyr and that his death would spark a Civil War in Germany. Instead he believed Hitler should be brought to trail for his crimes. 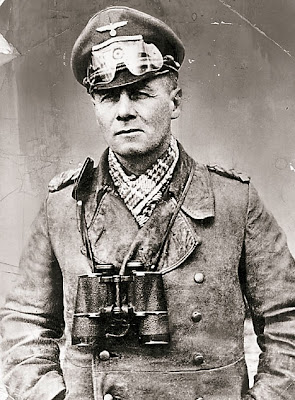 Non-the-less the Field Marshal was implicated in the assassination attempt and Hitler (wanting to avoid a scandal) gave Rommel the option to commit suicide. As an incentive to choose this option Rommel was told in no uncertain terms that his family would suffer if he chose a public trail but would be protected if he took his own life.

I don't think there can be a better epitaph than that given by Churchill on hearing of Rommel's death: "He also deserves our respect, because, although a loyal German soldier, he came to hate Hitler and all his works, and took part in the conspiracy to rescue Germany by displacing the maniac and tyrant. For this, he paid the forfeit of his life. In the sombre wars of modern democracy, there is little place for chivalry."
Posted by BigLee at 13:01