I recently came across a pictures of the eminent writer HG Wells playing a Wargame and was fascinated to find that in 1913 he actually wrote a book on how to play Little Wars as he called them. 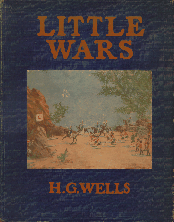 It is considered by many to be the first proper set of Wargames rules although it is written with a degree of pre WWI naivety. Wells's of course was a well known pacifist and some his own philosophy can be seen in his words. 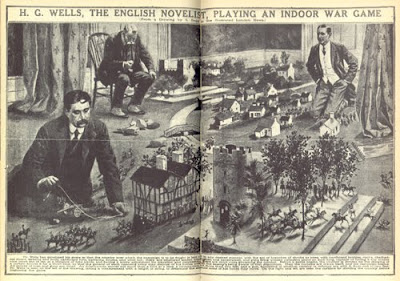 The picture is taken from the Illustrated London News and the full caption reads:

"Mr. Wells has developed his game so that the country over which the campaign is to be fought is laid out in any desired manner, with the aid of branches of shrubs as trees, with cardboard bridges, rocks, chalked-out rivers, streams and fords, cardboard forts, barracks, houses, and what not; there are employed leaden infantrymen and cavalrymen, and guns firing wooden cylinders about an inch long, capable of hitting a toy soldiers nine times out of ten at a distance of nine yards, and having a screw adjustment for elevation and depression.

There are strict rules governing the combat. Before the battle begins, the country is divided by the drawing of a curtain across it for a short time, so that the general of each opposing army may dispose of his forces without the enemy's being aware of that disposition. Then the curtains are drawn back and the campaign begins. All moves of men and guns are timed. An infantryman moves not more than a foot at a time, a cavalryman not more than two feet, and a gun, according to whether cavalry or infantry are with it, from one to two feet.

Mr. Wells is seen on the left of the drawing, taking a measurement with a length of string, to determine the distance some of his forces may move. On the right and left are seen the curtains for dividing the country before beginning the game."
(Source: Web Page by Phil Dutre)

Little Wars was first published in 1913 and it is now available online free at Project Gutenberg. The most recent edition of the book in 2004 includes a foreword by Gary Gygax.
Posted by BigLee at 09:01