The Opel Blitz Opel 3.6-36S/SSM Gleisketten-Lastkraftwagen or Opel Maultier (meaning "Mule") was a vehicle born of necessity. When Germany invaded Russia it soon became clear that normal wheeled vehicles were going to struggle on the poor quality or often non existent roads. By the spring of 1942 it was decided to produce half tracked versions of existing wheeled vehicles. The Opel Blitz (pictured left) was one such vehicle. With its three ton load carrying capacity and its proven design it was already the backbone of the mobile armoured divisions. Conversion to a half tracked model meant this vehicle saw service until the end of the war. 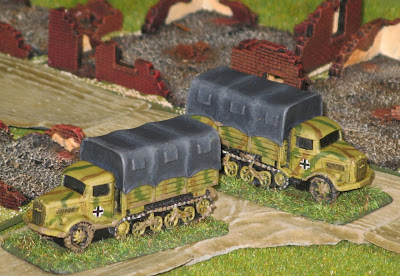 These miniatures are all resin (with integral base) and produced by Battlefront for the Flames of War game. I picked them up at the Redoubt show way back in July simply because they looked good. The models were actually quite easy to paint although I did find I needed to give them a good scrub in detergent to prep the surfaces for painting. 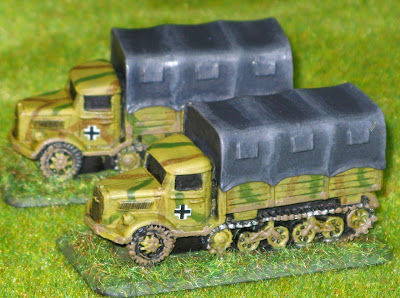 The detailing on the resin miniatures is quite good without being overly elaborate and this actually made these easier to paint. The only downside to them being a single cast model their is no clearance between the vehicle and the base. This can be 'hidden' by painting the area black, which is fine for wargaming miniatures but maybe not so if you collect for display only.

I'm still unsure how I can use these in my Panzer Company but I'm sure I'll find a place for them eventually.