Fate of a Nation

Today is the anniversary of the Battle of Hastings which took place in 1066 on Senlac Hill, seven miles from Hastings. The forces of the invader Duke William of Normandy, later called William the Conqueror, defeated the English army and their King Harold II of England who died on the battlefield. 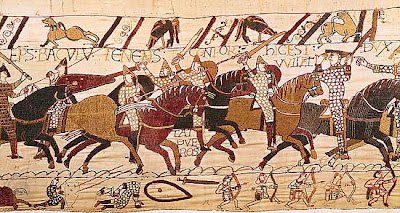 Harold is often derided as a rash commander, rushing to meet his second adversary in the space of a month (Harold defeated King Harald Hardråda and at the Battle of Stamford Bridge, near York on the 25th September). Many commentators & armchair generals have stated that Harold should have waited in London while he gathered new recruits and rested his Housecarls. But having read a little about the man I think he was far from rash and impetuous. His rapid deployment against William was bold and decisive and his choice of defensive position, Senlac Hill, was excellent.

A few years ago I had an opportunity to walk the battlefield with an excellent audio guide by English Heritage and I learned just how steep the hill is when your at the bottom of it. The Slope, combined with the English Sheildwall, effectively neutralised Williams greatest military asset, his mounted Knights. Ultimately however it was discipline that counted and Williams army was able to draw some of the defenders down from their strong point. Little by little the Saxons were whittled down until they couldn't hold their line any more.

The end was swift and Harold was probably cut down with the last of his Housecarles as his army disintegrated. The popular myth of Harold being killed with an arrow in the Eye was most likely a neat bit of Norman 'spin' as it was common in medieval iconography that a perjurer was to die with a weapon through the eye. So, the tapestry might be said to emphasize William's rightful claim to the throne by depicting Harold as an oath breaker.