Well I've finally finished painting my Panzer IV Ausf. H Platoon which I started way back at the beginning of September. Its been a long trip and I feel like I learned a lot about working with this scale and with multi part, multi material models. In particular the Schürzen plates have given me grief. It also didn't help that I've been very busy at work lately so time for painting time was often hard to find. Here are a few pictures from the early development stages. 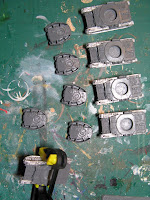 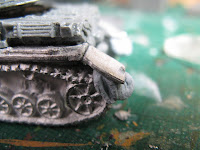 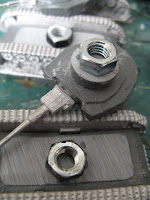 The first picture shows how I fixed the tracks to the resin Hull pieces. The second picture shows the Mud Guards which I still consider to be too flimsy and their connection to the Tracks to be too small for a robust bond. I strongly suspect these will need regular repair once these models get into usage. The Third picture shows the bolts I fixed to the turrets and hulls to hold the minis while painting. I detailed this method in a recent post. The last of the four pictures shows the assembled vehicles base coated and highlighted awaiting detail.

So how did they turn out in the end?... here's the eye candy. 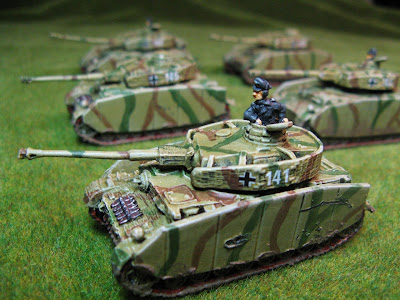 I'm still not 100% happy with the finished job, in particular the camoflage pattern. Despite my earlier experiments I'm still not totaly happy with the faux airbrush technique. I think I made the mixture a little too strong and consequently the camo stripes are quite bold. Despite this I do feel I learned a lot and the next platoon of tanks I paint will be much better. 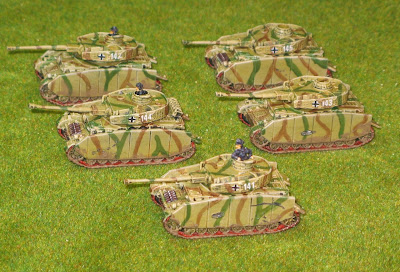 Having said that I think they look pretty good in formation and I'm looking forward to playing with them. One of the things I like most are the unit markings (decals by Battlefront) which help bring the platoon together. 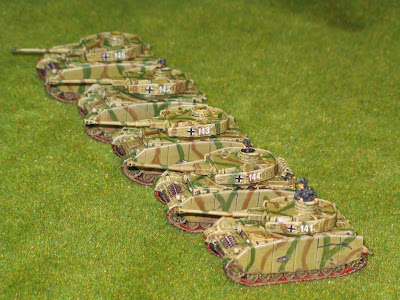 Now all I have to do is decide what to paint next and that will depend on what I buy at the SELWG show this sunday (More on that nearer the time).
Tommorow I'll post pictures of two Opel Maultier (Sd.Kfz.3) which I also completed while doing the Panzer IV's.
Posted by BigLee at 09:01