I've just finished reading Band of Brigands by Christy Campbell and if you are into the story of Tank development or just the history of WWI then this is well worth buying. The book uncovers the early development of the tank up to 1918 and the depth of research and detail contained inside its 480 pages (in the paperback version) can at times make this a heavy book to read. However through the details of meetings, Whitehall rivalries and political ambitions there are constant examples of the experience of the ordinary soldier. This helps the narrative flow easily between the smokey refinement of gentleman's clubs and Whitehall in London to the muddy hell of the Somme. 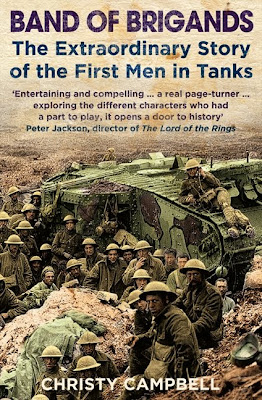 The opening chapters set the scene of a European was that has ground into a blood soaked impasse with a war that neither side could 'win'. The Germans seem to have settled on the policy of static defence, holding onto their gains from the opening months of the war. The Allies meanwhile try time and again to break the stalemate with men and shells and bayonets. This picture of futility has been burned into our collective Psyche and for many people in Europe they could see no end to the slaughter.

In the background however there was a growing demand for some new tactic or weapon that would unlock the stalemate and allow Europe's armies to fight a more traditional war of maneuver. Many wild and impractical solutions were devised and some, such as the use of Poison Gas, were implemented with little or no effect except to increase the suffering at the front. A handful of individuals however held a vision of a fighting machine capable of crossing no mans land and the trenches beyond.

The following chapters go on to reveal the slow and painful development of the Tank from several crackpot ideas to unworkable prototypes through to the first proper tank, Little Willie. The concept was developed further and thus Her Majesties Land Ship Centipede was born. Now the authorities seemed to be grudgingly accepting that maybe this concept had some promise, and a a small initial order was placed for 100 MkI's.

Secrecy was something of a joke. During the preceding years many people who had a hand in the development and concept of the tank had been openly discussing (and in the case of Ernest Swinton, lobbying) this potential wonder weapon. Questions were even asked in the House of commons and printed in Hansard about the new land ships. Fortunately the Germans didn't seem to have a subscription to Hansard and the secret remained secure. A new Training camp was established at Elveden Hall in Norfolk and the first recruits for the Machine Gun Heavy Section (the genesis of the Tank Corp) began to be assembled.

Secrecy however seems to have still been something of a farce and of course it worked both ways. For the new commanders and trainees of the Heavy Section finding out what the 'front' was actually like was near on impossible. None ever got close enough to the lines to see the sort of obstacles they would actually have to traverse and the conditions they would have to endure. None the less a mock trench system and man made trenches were dug at Elveden and the new tanks were put through their paces.

The vehicles themselves were far from perfect, indeed by any acceptable modern definition they would still have been described as prototypes. Prone to breakdowns they were hellish to work inside. Hot, incredibly noisy and filled with fumes the men inside were battered, bruised, roasted and even on some occasions rendered unconscious by the fumes. Despite this they were about to be committed to battle for the first time. The Somme would be their bloody debut and it was a muddy disaster.

Throughout the remainder of the book Campbell takes the reader through what felt like one disaster after another. Yet despite the heavy losses, breakdowns and lack of proper tactics the tanks had impressed the likes of Sir Douglas Haig enough that he called for more to be built. At Cambrai Tanks were used for the first time in a combined Arms operation that was initially a huge success. But the lack of a strategic reserve meant that the Germans were able to counterattack and retake most the the ground that was lost. Perhaps more crucially they were also able capture some British tanks and transport them to Germany for their secrets to be unravelled. 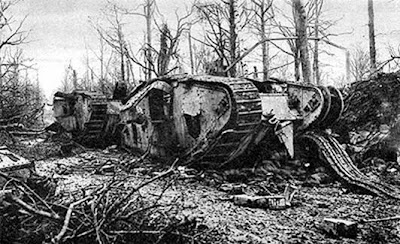 At times during my time reading this book I felt like shouting at the pages. Battle after battle seems to have been fought using the the same plan as last time only tweaked a little "because this time it will work". The unmitigated horror and loss of life pours out of the pages with every first hand account and eyewitness report. The Generals in charge were not the ancient traditionalists they are often made out to be. Haig in particular seemed very open to new ideas and new technology. But time and time again the implementation of new weapons seemed to be piecemeal, premature and poorly executed resulting in horrific casulaties.

This book is definitely worthy of a place on my shelves and I thoroughly recommend it to anyone interested in the period.