Last night the Dagenham Dungeon Delvers gathered for our semi-regular 4E D&D campaign. Once again we found ourselves in an unequal combat situation and somehow managed to pull victory from the jaws of defeat.
The group entered as secret 'back door' route into an Orc infested Temple of Orcus. Here the walls between the Shadowfell and reality are thin making the whole area dangerous. We entered a large chamber that seems alive with shadows and heavy air. Our trepidation was born out when 3 Shadow Hounds come barreling out of a wall and into the chamber, becoming solid as they did. After a brief pause as each side sized the other up the hounds attacked. Moving quickly to arrange ourselves into a defensive formation the hounds then teleported in amongst us, negating our defensive posture. To make matters worse just as battle commenced three Shadow Hunter Bats dropped from a darkened corner of the cave (where they were roosting) & swooped towards the melee. 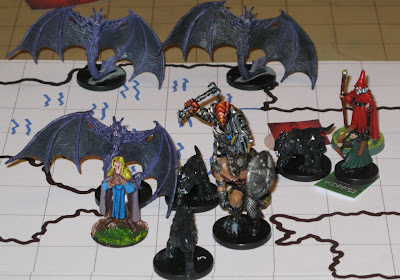 My Dragonborn, Uthek, killed one of the hounds (after a couple of rounds of combat) but the others pressed in close with the Shadow Hunter Bats making flyby attacks with their tails. Wounds were starting to pile up an several of the party were effected by the fear inducing howl of the hounds.
We dressed our wounds and decided to press on towards the Temple. The passage was dark, often narrow and alarmingly shadow filled. Despite this the group pressed on and soon entered the hidden chamber at the back of the temple... we were in! 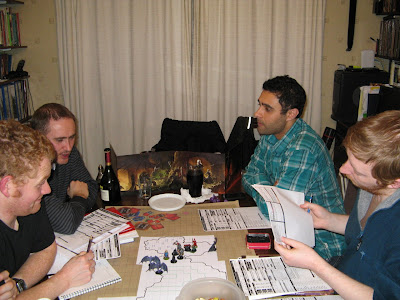 Our initial exploration revealed nothing more than an empty room and hints of another plane of existence pressing on the area. The next door is opened, leading into a long corridor.
The Halfling then opens the opposite door to Room 3 with a little less subtlety than the situation required. Inside the room are 4 rather startled Orcs and several straw ‘cots’ indicating others elsewhere in the temple complex. Here we go again....
Posted by BigLee at 14:39