I've been working on a Panther Tank (Ausf A) from the Panzer Kanonen boxed set. I wanted to give this model some special attention because it is supposed to be a command vehicle and because I like the Panther. For me it's one of my favorite tanks of the second world war.
This model by Battlefront required a significant amount of construction before undercoating. While I'm sure the finished model looks historically accurate the parts don't seem to have been made with the modeller or gamer in mind. By that I mean there is little or no reinforcing at the joint of various parts making the finished vehicle very delicate. For example the front mudguards fit one straight edge to another with no support to hold them in place. One miss placed finger and they would fall off, not ideal for models designed to be played with. To overcome this problem I reinforced the joints underneath where they could not be seen. I still think its a weak build and only time (and handling) will tell.
Once the model had been constructed I used GW Chaos Black to prime it ready for painting. This does make bright colours darker so I usually add two coats of basecoat (drybrushed initially) to produce strong block of colour. 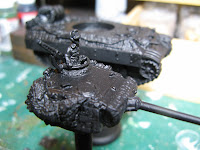 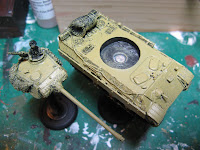 I then used a dark brown wash to make the Zimmerit coating stand out and to accentuate the shadows before giving the whole model a light drybrush of Ivory to bring out the highlights and define hard edges. With this done I then focused on the detail, starting with the areas where the Zimmerit coating had been battle damaged. 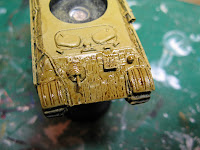 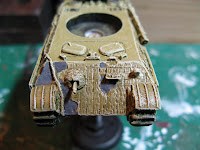 I gave the bare metal areas a layer of German Grey and then picked out the edges using a Terracotta colour. Individual spots of orange were then added. This then needed to be toned down with a very light drybrush of Wolf Grey and a few small splotches of German Grey again on those areas where I thought the 'rust' was too bold. 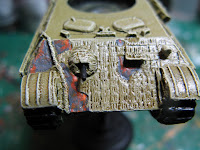 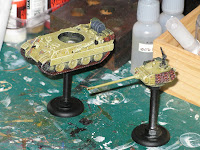 The next step was picking out the tracks and other items in the red oxide colour that was typical on lots of German equipment (pretty much everything left German factory's primed this way) . I then focused on the various 'scenic' elements; Camouflage nets, crates, oil drum; personal equipment etc.

I spent quite a bit of time on the commander trying to get the insignia right but I'm not sure I've put enough contrast into his jacket. I need to work on this in future projects. 15mm figures are just so damned small compaired to 28mm !