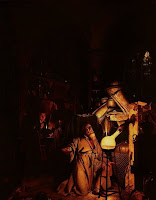 When it comes to describing their laboratories it is all too easy to rely on clouds of coloured smoke to hide the details. Alchemists are inextricably linked to the obsessive search for a way to turn base metals into Gold. But the reality is that many were employed as doctors and philosophers, and their scientific skills were much in demand. Their laboratories were the setting in which many of the modern day lab techniques were first developed. These included:

These early pioneers of chemistry and science are often used in fantasy settings like D&D as a way of providing characters with non-magical weapons and useful items. This painting from the 17th Century gives a much more realistic idea of what to expect when entering the world of the Alchemist. 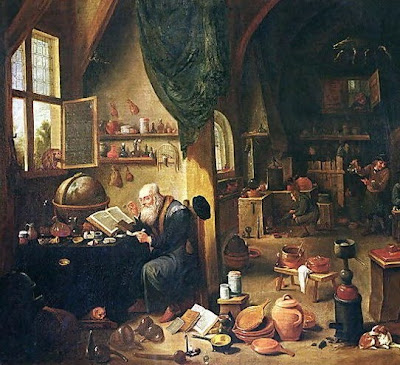 Looking around this painting there are many items that could be incorporated into the description of an alchemists lab. Vessels of many different sizes, glass jars, scales and weights. All in all more interesting than the stereotypical smoke shrouded, wild eyed eccentric of most fantasy games.
Posted by BigLee at 09:01