Our gaming group, the Dagenham Dungeon Delvers, got together last week for our first game of the year. Other responsibilities (Jobs, Kids, Partners etc) stopped us meeting earlier but on the plus side most of the gang was able to attend for a change. Despite a late start we got a lot done and this was one of the best games we've had in a long time. One of the factors in our favour was the fact that we only had our own characters to run instead of two each. Each player was able to focus on his PC's strengths and we worked well as a team. The Evil GM tried his best to ruin our fun but with our PC's working in unison we overcame each of the three combats thrown at us easily. 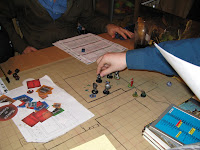 Possibly the best encounter of the evening occurred when our PC's burst into a room where a Dark Elf Wizard stood chanting a spell outside a chalk circle. Inside the circle were two swarms of vicious looking red spiders. The Mage was able to break the chalk line with his foot, releasing the swarms at us, before combat started. Events unfolded fast with our own Wizard, Mindaris, casting Incendiary Detonation on the Mage, knocking him prone. There then followed a torrent of ranged attacked from our Eladrin Swordmage and the groups Halfling Brothers Janek & Jarped. 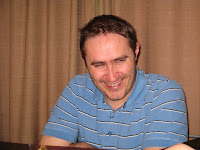 By now the Dark Elf was bloodied and in trouble... so my Dragonborn Warlord, Uthek, rushed into the room - ignoring opportunity attacks from the released spider swarms - to attack the still prone Wizard. Then Uthek used his action point to make another attack which dealt an improbably 32points of damage, killing the Dark Elf Mage stone dead. The look on the GM's face was worth every hard fought level up to this moment. His lip quivered and he whined "But my Mage didn't get to do anything"... "That's wrong...[said I]...he smudged a chalk line on the floor".

Thankfully the GM has a sense of humour.

I have to add that while my PC dealt the killing blow it was very much a team effort and proved what we could achieve when we employed our resources in a combined strategy. In that one moment of guts and glory we had shown what D&D is all about; co-operation, teamwork and good clean fun.