Us gamers can be a right boring lot sometimes. It's like we've spent a lifetime nurturing our creativity and then put a cork in the bottle to stop it escaping. We've become worshipers of min-maxing, dedicated to rules-lawyering and slaves to convention. What am I rambling about I hear you say. I'm talking about impetuousness and those acts of seeming stupidity that define the ordinary character from the hero. 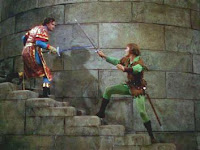 Swinging from a chandelier may not be sensible or tactically wise, but is heroic and in the best tradition of those old Hollywood classics. It could end badly or it could be a turning point in a battle. As players we have a responsibility, nay a Duty, to have fun. Stop playing it safe and do something rash and heroic for a change. Take the initiative and shock your enemies (and fellow players) by being unpredictable. 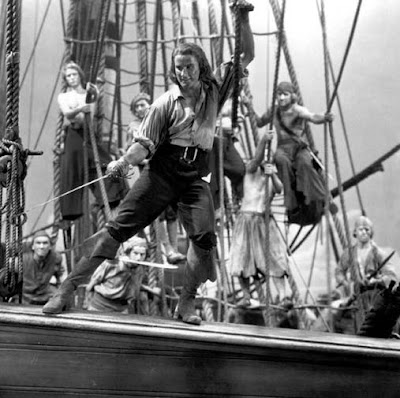 Responsibility for turning this tide of conventionalism is not just in the hands of the player. The GM needs to be flexible with the rules (an anathema to the rules lawyer) and be prepared to reward acts of gross heroism/stupidity. Give bonus XP for those Errol Flynn moments and encourage players to be the hero's we envisaged when we first rolled their stats. If necessary throw the rulebook away and just run with it.

One last thought. If you thought rashness and daring-do were just the province of Hollywood then pull out a history book. Their are dozens of examples of hero's that risked everything to achieve the impossible. T.E. Lawrence, Hannibal, Douglas Bader and William Wallace to name but a few. All of these heroes failed, all made mistakes but we remember them for those sometimes rash and impetuous actions that became moments of triumph.