As the old -and much maligned - saying goes, there is no I in Team. Yet when we write up our Characters there is often little or no mutual connection between the characters and each comes with his own intricate (and sometimes conflicting) back story and motivations. Wouldn't it be better if all the characters were created together, with a unifying motivation guiding them towards their goal?

Unity of purpose can create a streamlined and efficient team but it can be constricting and even act as a hindrance. I like to think of the analogy of a multi billion dollar business that had a strong and well defined mission statement. The company actively pursued this mission and encouraged all its staff to strive for the same goal. Yet ultimately such inflexible dedication brought about a paralysing lack of imagination that stopped them from seeing the disaster they were creating for themselves. And when that business came to grief it took the whole of the financial sector with it and ultimately failed to achieve its mission in the most spectacular act of self destruction seen for 80 years. 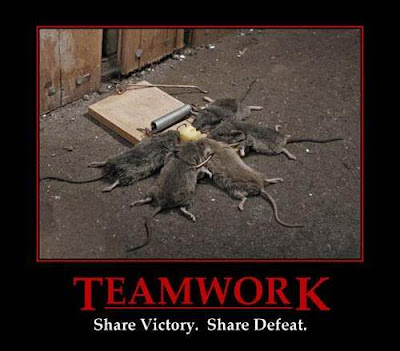 Individuality may not be efficient but it is dynamic and can throw up unpredictable strengths. One is the ability to deal with a wide variety of situations. This is why we don't create an adventure party that consists wholly of fighters or clerics. The strength of the team comes from its differences, not its similarities. I think this is even more evident in 4th Edition D&D than in previous versions. In 3.5e for instance the adventuring party sometimes felt and acted like a group of individuals that just happened to be going in the same direction as each other. In 4th edition the subtle interplay between the powers of different PC's can produce some stunning and unexpected results.

That's not to say that individuality doesn't have its restrictions. Extravagant and conflicting back stories can be a nightmare for a GM to circumnavigate. But that's a subject for another day.