Yesterday the BBC ran an interesting article about the use of 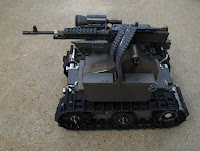 Battlefield Robots in modern theatres of war. The role of the Reaper Drone plane is well known but increasingly ground forces are resorting to the use of robots to venture into harms way instead of sending a soldier. Robots can be used to shoot down incoming artillery shells, attack buildings and deal with Improvised Explosive Devices (IED's).

The picture above is a weapon carrying Talon robot developed by QinetiQ. The amazing thing about these vehicles is that, in many ways, they are not a million miles from a vehicle that saw service in WWII! The Germans developed a remote control mini-tank called a Goliath which was essentially a tracked mine used for battlefield demolition. This picture shows three such vehicles captured by the allies after D-Day. There's a Goliath at the Tank Museum in Bovington. 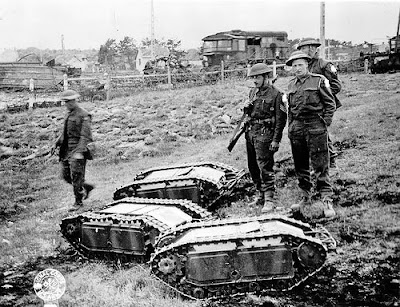 Few people would disagree with the statement "If technology can be used to reduce the danger to service personnel on the battlefield, then it should be". In practice this has lead to the use of Drones in remote and dangerous parts of Afghanistan and Pakistan which have undoubtedly saved the lives of many soldiers. The flip side of course is the unknown number of civilian casualties that come with the use of such weapons. 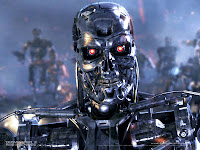 A lot of what I have read in recent years suggests that military thinkers are loath to make battlefield robots fully independent of human operators. A 'driver' or 'pilot' has to make a judgement call at the end of the day, and they are accountable for their actions. But a robot can only carry out its function as well as the programming that controls it. I for one am not happy at the prospect of letting the machines make their own decisions - and not just because I grew up watching the Terminator movies!

We are entering an age of technological warfare that even a few short years ago would have seemed like science fiction. These new weapons bring with them a whole range of new ethical questions that need to be addressed before we get to the battlefield. I'm very much of the school of thought that says just because you can create a thing, does not mean you have to use a thing. Restraint and humanity are what separate us from our enemies and I don't think we should ever lose sight of that.