Following on from yesterdays article about teamwork today I want to talk about Backstories. Some players are not interested in writing a history for their character. The PC just pops into existence at the appropriate time and goes on an adventure. Then there are those players who write an Epic narrative for their characters complete with family tragedy, personal epiphany and a Nemesis or two. But what happened when two Backstories collide? 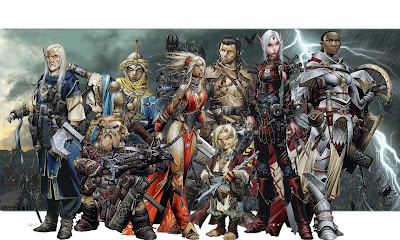 The long suffering GM has several jobs to balance when writing a game. First he has a story to tell; second he has players he needs to motivate to explore that story; and third, he has several back stories that need to be nurtured and developed. This latter part can be frustratingly difficult to do because unlike the other elements in the puzzle the GM often has little or no control over the Characters past histories. Here are four ways in which the GM can take the creativity of the players and run with it.

Pick one bit and expand on it. A character backstory could be as little as one paragraph and as long as a piece of string (trust me, I've seen some whoppers!). If the GM tries to incorporate everything into his game their will likely be no time to explore the adventure laid out before the players. I found that by taking just one bit of a backstory and weaving it into the game your both acknowledging the effort the player put into writing a history and giving them a direct and personal link into the adventure. Its also easier to take one small bit and then expand on it than taking a complex chunk and trying to make it fit into the game.

Find common threads. Roleplayers tend to have similar backgrounds. if you were to look at the books they have read you'll probably find the same list of Fantasy classics coming up time and again. Consequently many character histories have similar themes of hardship, tragedy, trials of personal strength and ultimate triumph over adversity. The rag tag group of adventurers may have come together by accident but they could find they have a common bond and shared values (even if their alignment is different).

Link stories in unexpected ways. Taking the idea of using a small element from a character history a step further, why not link those bits in some tangible physical way. If two PC's are orphans, make the killer of both families the same man.

Make those back stories your own. Use character backstories as a starting point, develop them and bring them to a common point. This approach doesn't invalidate anything the players have written but it does bring stories together into one single thread that can then be exploited by the GM.

Diverse and conflicting backstories can be a challenge. But they should also be looked on as an opportunity to make adventures more personalised and rewarding to play.