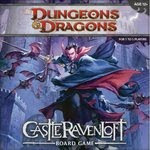 I've just read about an interesting new release from Wizards of the Coast (makers of D&D) due out in August 2010. Castle Ravenloft is a cooperative game for 1-5 Players and is set in the home of Count Strahd von Zarovich's castle in the realm of Ravenloft. Created by veteran designers Bill Slavicsek and Mike Mearls the product was first announced in August last year so its a much anticipated release.

Here's some info on the game from the WotC website: "Evil lurks in the towers and dungeons of Castle Ravenloft, and only heroes of exceptional bravery can survive the horrors within. Designed for 1-5 players, this boardgame features multiple scenarios, challenging quests, and cooperative game play."

This game comes with the following components: 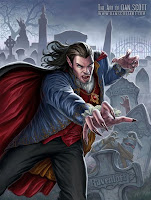 Unlike similar games (eg Descent) Castle Ravenloft is designed to be played in an hour. Combined with the random tiles, wandering monsters, and character modela, this sounds an awful lot like a version of Dungeonquest. Having said that it remains to be seen how much this new game plays like its predecessors or if it will be influenced by the new 4th edition D&D ruleset. Its being billed as a "D&D Experience" so my bet is that there will be similarities in style to the current edition of D&D.

There's also been plenty of debate in online forums like ENWorld about the possibility of using existing D&D miniatures in the game (complementing the 40 models that come with the game itself). There has been relatively little info about what models come in the game although I have read here that one will be a Huge Dracolich!

Castle Ravenloft is currently targeted at a retail price of $65 and has a scheduled release date of August 17 2010.