The Dagenham Dungeon Delvers met again last week in an almost unprecedented second game in a row without cancelling. I've not had time until now to download the pictures from the game but now that I have one thing stands out. Meeting the Aspect of Tiamat was a brown trouser moment. Let me explain...

Our characters have entered a dungeon complex deep underground that has been occupied by a Dark Elf and her Orc minions. The complex was once a temple to necromantic evil and she is digging in collapsed tunnels seeking a treasure trove of evil artifacts supposedly buried here. When I say she is digging that's a misnomer; the real work is being done by a group of Halfling slaves, including the father of the two Halfling adventurers in our party. Our mission to rescue the Halflings has been an eventful one. The abandoned temple is situated at a weak spot between the real world and the shadow realm. Its not a pleasant experience looking at the walls and seeing shadows leaping and cavorting across the plaster.

Having cleared the upper level (our entrance point) without raising the alarm we decided to rest and begin our rescue attempt the next morning. But during the night our Dragonborn Paladin had a nightmare linked to a crisis of faith that threatens to overturn his dedication to his god, Krull. Part of that nightmare and crisis took the form of an encounter with the Aspect of Tiamat. the GM presented the encounter in a way that left all of us wondering if this was a dream or reality. This dungeon complex is strange enough to have us all second guessing, but when faced with the aspect we all silently prayed it was just a bad dream. 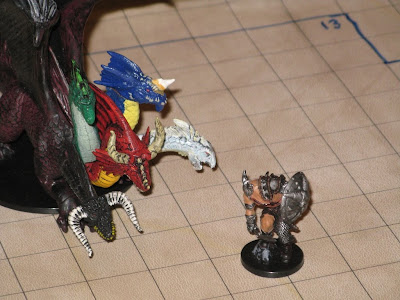 Up till this point in the game the normal chatter and joking around between players marked this as a typical game session... then the Aspect model was placed on the table and everyone fell silent. Various oaths and curses followed as we all scrabbled for our character sheets thinking "how the hell are we going to beat this!?!". Fortunately the GM wasn't about to unleash this on us and the whole episode was a dream designed to test the faith of the Paladin.

The rescue attempt was a success by the way and we vanquished (read: 'splatted') the Dark Elf and her Orcs in a surprise attack that had them on the back foot from the first turn of combat. Our game session overran a little to finish this encounter but it was totally worth it. The only problem is we now have a dozen half dead Halflings to protect on our return trip to civilisation. Somehow I can't see the GM giving us a quiet trip home.