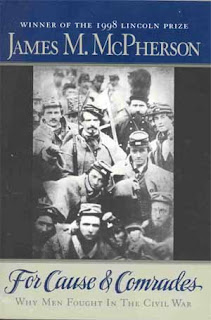 I read For Cause & Comrades a few years ago and decided to pick it up again because it was such a good read. This book does not try to explain the reasons for the American Civil War but instead looks inside each soldier - on both sides - and asks, what made them fight.

The thing I liked most about this book is that it was filled with the voices of the men that took up arms. Literacy was high amongst ordinary soldiers and they were prolific letter writers. Those communications that have survived paint a picture of life and death amongst the common soldiers in a way that that had previously only been the preserve of the learned officer class.

The author, James McPherson, tries to answer a very important question. How does an army hold itself together in the face of extreme hardship. What is it that stops its constituent parts from packing up and going home. This question is all the more relevant when looking at the armies of the south, consisting largely of volunteers. Unlike the North, which raised new conscripts throughout the war, many Southern soldiers saw service until death or defeat brought that service to an end.

McPherson concludes that religion, honour and duty played a great part in holding these men together. But perhaps more surprising is that he found men on both sides considered themselves to be fighting for the same principles of liberty, freedom, justice, and patriotism. Tales of families split by the war - Brother verses Brother, Father verses Son - have become common folk law. But the real tragedy of the Civil War is that the soldiers of both sides were not as different as history would like to believe.