Playing with my New Camera

Only recently I wrote about my Frugal Year and how I was trying to save money for a new Camera and a Weekend at Bovington in June. The unextravagant lifestyle still remains but due to an unexpected windfall I have been able to buy the Camera earlier than planned. Last year I reported on the passing of my Grandmother and, unbeknown to me, she left my family and I a small sum of money. 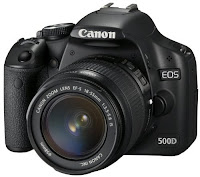 Some of this modest legacy was used to get the camera I wanted. I'd already saved some money towards this purchase but I wouldn't have been able to get it until later in the year, after the best of the conventions and reenactments had been and gone. My Canon powershot compact is a good camera, but nothing near the 15 mega pixel awesomeness of the Canon EOS 500D.

I'm hoping - with some justification if my research is correct - that this new camera will help me take much better pictures of my painted miniatures. It has a much wider range of functionality than my old compact camera which means it'll be well suited to convention photography (where the light is poor and tripods are impractical), to reenactments (where fast shutter speeds are vital) and for photographing painted miniatures (where the superior Macro abilities of this camera will shine).

Over the next few weeks I intend on getting in some serious 'play' with this camera to familiarise myself will all its functions before Salute in April.

Email ThisBlogThis!Share to TwitterShare to FacebookShare to Pinterest
Labels: Accessories