I've finally finished painting up my M10 Tank Destroyer Platoon. I started this project way before Christmas but due to a missing part (and a saga trying to get a replacement) it got pushed back till now. 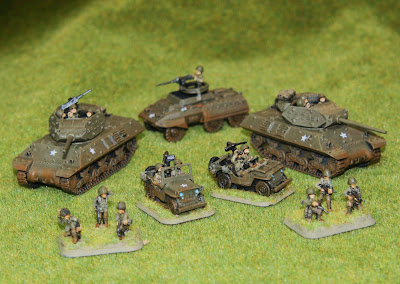 The M10 Tank destroyer was based on an M4A2 chassis and carried an open topped turret the held a crew of three. The main armament was a 3" anti-tank gun which could fire armour piercing rounds effective up to 1000 yards on 30 degree sloped armour. This vehicle was designated a Gun Motor Carriage (GMC) rather than as a Tank. 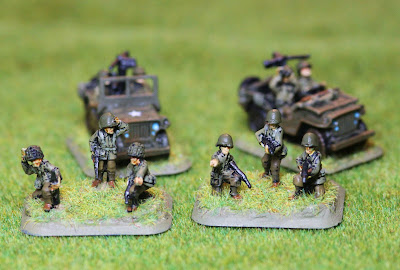 The main advantage of the M10 - and other GMC's - was its speed and maneuverability, but this was achieved by reducing weight (ie sacrificing armour) which made this vehicle vulnerable to German anti tank guns. I've also read that gun traverse was via manual hand crank and was therefore quite slow. The open turret improved crew visibility but also left them vulnerable to small arms fire and mortar attacks. As a consequence most units were accompanied by Jeeps and later by armoured utility vehicles such as the M20.

I've not gone into too much detail with the painting of this platoon because they are not for display. These are gaming miniatures first and foremost and as such I instead concentrated on strengthening and reinforcing the models to withstand regular handling. Wherever possible I 'braced' vulnerable parts (such as prominently exposed guns) against other parts when gluing. I also used off-cuts from sprues to reinforce fixing points. Purists would be horrified if they looked closely at these models but my main aim was to build models that would hold together during play.

I've also deliberately employed a light-touch when applying decals. These models are for my Brother-in-law to use and he has yet to decide on exactly what Regiment he wants them to be. I can add decals later if needed. Tomorrow I'll post some pictures of all my FoW models to date and discuss my next project.