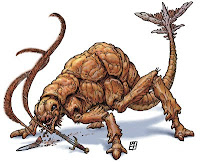 The Rust Monster is an iconic D&D beast from the earliest days of the game that has remained in every edition since it was first introduced. The creature itself is not particularly dangerous but it's diet leaves many a hero quaking in his shiny metal armour. The Rust Monsters ability to smell, and its hunger for, anything made of metal has made this a formidable opponent in D&D games for decades.
The origin of this creature is simple and typically creative. According to Gary Gygax himself... "When I picked up a bag of plastic monsters made in Hong Kong at the local dime store ... there was the figurine that looked rather like a lobster with a propeller on its tail ... nothing very fearsome came to mind ... Then inspiration struck me. It was a "rust monster."
(Source: "Ecology of the Rust Monster". Dragon Magazine #88, 1984) 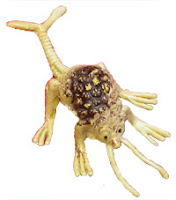 The thing that makes the Rust Monster an Icon for me is that its more than just a combat encounter, its a trap and a puzzle at the same time. How do you deal with a creature that will eat your precious +2 Sword or your shiny new Plate Armour? And unlike other monsters, an encounter with a Rust Monster will impact on future encounters because its will materially weaken the adventuring party in a way that no other encounter does.

D&D is largely a game of acquisition; the accumulation of XP, of Gold and of Magical Equipment are central to the players progression. So when a Rust Monster ambles around the corner of a dungeon it instantly threatens the players in a very personal way. It taps into the Psyche of the game and the players in a way that no other creature does and turns a simple scavenger into a classic monster.