My Flames of War Forces

As promised yesterday here's a picture of my painted Flames of War forces, thus far. I'm painting both sides at the moment, but I'm hoping to rope my brother-in-law (and prospective opponent) into some painting soon. The US forces shown here are the M10 tank Destroyer Platoon I wrote about yesterday and a small platoon of Shermans. For my Panzer Lehr tank Company I have a platoon of Panzer IV's, a Platoon of Stug G's and two Opel Maultier trucks.

Needless to say neither side makes an army but its a start. Now we have enough vehicles to play some basic games, learn the rules and decide where we want to go next. 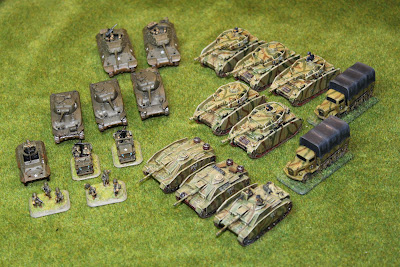 My next painting project is a Panzergrenadier Platoon. I've been gathering reference photo's and colour schemes and now feel able to give this platoon the detail it deserves. However given the slow speed with which I complete projects, and the fact that I am going on holiday in a couple of weeks, I can't see this getting finished before the end of the month. I'll try my best though... promise. 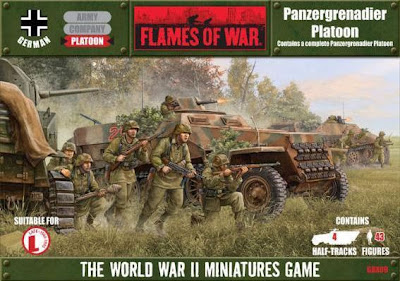