I've started a new Flames of War painting project, the US M10 3"GMC Tank Destroyer Platoon. Actually this is the second time I've 'started' this project because I had this ready to go way back in October last year. I got as far as cleaning the models of minor flash and other casting defects when I realised that I was missing a part. I immediately contacted customer services to request a replacement part and then waited....and waited.... 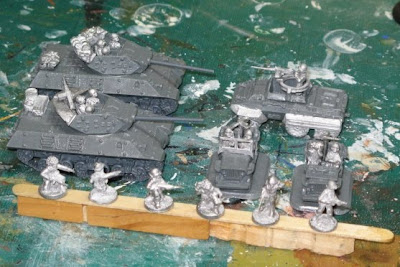 Unfortunately after several attempts I still don't have a replacement part and my confidence in the much praised customer service of Battlefront Miniatures has been severely dented. I hope this was just a blip and hope that any future problems are resolved more efficiently.

The part I was missing was the Turret Counterweight (the metal bit on the back of the turrets in the above pictures). I had one counterweight and decided to make a replacement for the other model. I ended up making a part using some waste metal (to give the part strength) and milliput putty for the detail. The finished counterweight should look fine when painted, especially as I covered its imperfections with some pre cast stowage items that came in the box.

Everything is now assembled and ready to be undercoated, which is my job for tonight. I'm hoping to get these painted in short order as I now have enough models for a few practice games with my Brother in law. Once we've had a chance to get to grips with the rules we can settle on a scenario for some future game and work towards that. As I'll be doing most, if not all, the painting/modeling the sooner we decide what we want to refight the better.