My Dice Lost their Mojo

Have you ever had one of those games when you can't roll for toffee? I had one of them Friday. The Dagenham Dungeon Delvers gathered for our regular bi-weekly D&D game and as usual we quickly found ourselves in trouble. 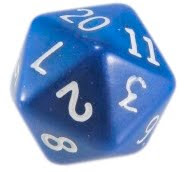 Our party of adventurers were given a new mission by our benefactor Minister Aldriac. We left the city, crossing a large lake on a ferry barge. We were on our guard crossing the lake but the attack came when we landed at the isolated jetty on the far side. That's when the dice started to misbehave. We were attacked by several Snaketounge Cultists and two Cockatrice in a prepared and concerted attempt to assassinate us. The jetty was sabotaged and in my first dice roll of the evening I failed to maintain my balance and my Dragonborn Warlord, Uthek, ended up in the lake.

As the battle raged on land (the rest of the party forced their way off the jetty) Uthek got to his feet, shook off his embarrassment and tried to fight his way out of the shallows. One failed roll after another followed. I used all my daily powers to no effect, I failed several saving throws and eventually I used up my encounter powers in an equally ineffectual manner. In fact I only had one successful roll during the whole evening.

After everyone had gone home for the evening I picked up my d20 and gave it a couple of test rolls... 2, 4, 1.... grrrrr. I was tired and angry at this point so I throw the dice across the room in disgust. With a deep sigh I decided I was being silly and went to retrieve my discarded dice. I found it sitting in the corner of the room and guess what? I'd rolled a 1!!