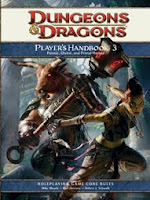 Today is Worldwide Game Day organised by Wizards of the Coast. This is a recurring event aimed at "Celebrating the Dungeons & Dragons Game". What this actually means is it's a worldwide promotion of the release of the Players Handbook 3 which was released last tuesday (March 16th).

The PHB 3 introduces Phsionic Powers into 4th Edition and includes six new classes including; Ardent (psionic leader); Battlemind (psionic defender); Monk (psionic striker); Psion (psionic controller); Runepriest (divine leader); and Seeker (primal controller). There are also four new races; Wilden; Minotaur; Shardminds; and Githzerai. There is an excellent review of the PHB 3 on the site Critical-Hits.com.
For more details about events in your area contact your local game storeor use the WoTC Store/event locator.
Posted by BigLee at 09:01