I mentioned a few days ago that I was going to start work on a Grenadier Platoon... well progress has been swift by my standards. All the models have been cleaned and prep'ed for painting and have now been primed. Aside from the incident with the exploding knife everything is going quite well.

I've decided to try a different technique for painting the infantry. Last time I followed the traditionally accepted method of fixing the individual models to a stick to make painting easier. But I found this made basing them (and not ruining the paintwork in the process) much more difficult. Plus my method for painting infantry stands is based on the use of several drybrushing runs followed by fine detail work to clean up the whole figure. This would work just as well with the models already based so I decided to do things back-to-front this time. If it doesn't work out I'll revert to the 'proper' method for future models.

Here's a picture of the based infantry. I'm using a quick drying pre mixed plaster for the bases. Its flexible and tough so should be able to stand up to handling in-game. 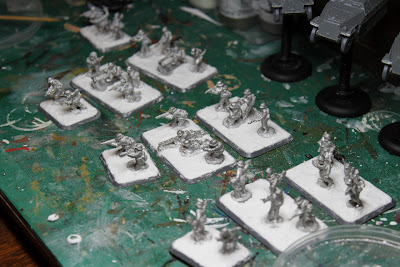 Sharp eyed readers have probably noticed that I'm actually painting my platoon as Lehr Gepanzerte Panzergrenediers which means each squad has two MG teams of four Grenadiers plus one tank hunter team of two Grenadiers which makes them excellent both in defense and assault roles. I'm looking forward to using these in action.