I had planned on getting a load of painting done over the weekend. I did get some done, just not as much as planned. The weather in the UK had been pretty crappy for months (more than 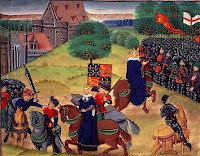 normal for winter - or at least that's how it feels) but this weekend the sun was shining and the wild was calling. Which basically means we were bored of being couped up and needed to get some exercise and a bit of fresh air. What fools we are.

We took the kids to Watt Tyler Country Park in Basildon. There's plenty of adventure playground equipment for the kids to wear themselves out on and some nice walks down to the river. But boy was it cold. There was what can only be described as a lazy east wind that didn't bother blowing around you, it just went right through instead. We were only out for a couple of hours but by the time we got home I couldn't feel my fingers, let alone contemplate picking up a brush.

The day wasn't a complete waste of time though. I've been to this park many times and knew about its proximity to to the birthplace 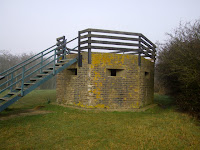 of Watt Tyler (leader of the Peasants Revolt in 1381). What I didn't know was that the site of the Park was once owned by the British Explosives Syndicate who established a factory there for the manufacture of Nitro Glycerine. Later the site was bought by the Nobel Explosives Company (the founder Alfred Bernhard Nobel invented Dynamite and later Established the Nobel Prize). There is a new visitor centre on the site and includes a very interesting exhibition about the parks explosive past.

During the Second World War the area was owned by the Ministry of defence and the important GHQ line of static defenses began in the park and stretched north through Basildon and Chelmsford. This was a vital line of defence in the event of invasion and several examples of pillboxes can be seen in the park and surrounding countryside.