A Tribute to my Nan

This morning I received the news that my Nan, Frances Cottle (nee' Boniface) had passed away. She had been ill for a long time and frankly the fact that she survived as long as she did is a testament to her strength and resilience. 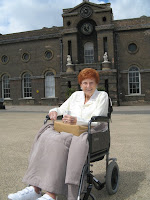 Frances was Born in 1918 into the new world that was Britain in the interwar years. She grew up in Woolwich and lived there until the Blitz destroyed her family home. She worked in the Woolwich Arsenal where she met my Grandfather, Bill Cottle. Nan once recalled that on her first date she was taken to the cinema where she had to pay for the tickets! Bill & Frances were married three months later in August 1942.

They moved to Manor Park in West Ham where they stayed until about 1958 when they got a house in Dagenham. Nan lived there right up to the end, although she has spent the majority of this year in and out of hospital. Back in June she was well enough for me to take her back to Woolwich for a look at where she grew up. Much has changed in the area and what the Germans didn't Blitz, post war development finished. However enough buildings remained for her to know she was home and put a smile on her face. In particular St Margaret's, the church where her and Bill married.

Frances leaves behind her four children, Valarie, Shirley, Joyce & David and a large family that will miss her and remember her.