Dungeonquest is a fantasy board game by Games Workshop, arguably inspired by the Dungeons and Dragons roleplaying game. The players must explore the monster haunted ruins of Dragonfire Castle trying to reach the treasure chamber at the center. Player survivability is as low as 15% making this a simple game to play but very hard to win. 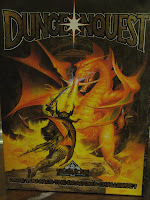 The Dagenham Dungeon Delvers met on Friday but were not able to play our regular D&D campaign due to an absent GM. So we decided to play Dungeonquest instead which had been lurking, unplayed & but not unloved, in the dark. Published in 1987 the game is for up to 4 players and game play lasts about 60 minutes. Each player takes it in turns to lay down a room tile creating their route to the centre as they proceed through the game. With each room tile the player draws a room card which either reveals treasure or pits the player against an adversary, a trap or a hazard. With a limited number of Hit Points, the random nature of the route through the dungeon and a limited to the number of game turns this is a deceptively hard game to survive. 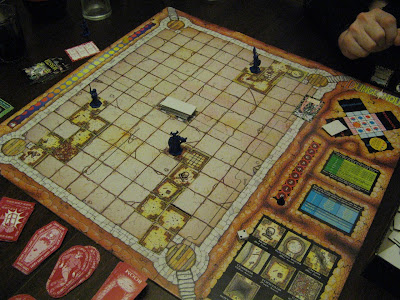 "A thousand years have passed since the evil wizard T´Siraman fell, but men still fear to enter his dark fortress of Dragonfire Castle, which squats grim and brooding atop Wyrm´s Craig. In the villages that huddle in it´s shadow, stories are whispered of the fabulous treasures which fill the castle´s dungeons, and of the Things which guard them. Old men draw closer to their fires and tell of the noises which echo across the valley at night, when the castle seems to take on a malign life of its own. Few indeed return in daylight; their eyes are troubled, and they are reluctant to tell of their adventures. None has ever resumed after nightfall.
The ruddy light of sunlight begins to burn off the autumn mist, and four pairs of eyes look towards the looming keep. Four minds reflect on the villagers´ tales, and four hands tighten their grip on four weapons. Sir Rohan the Knight, with his shining armour and greatsword; Ulf Grimhand, the Barbarian from the far north, with his huge double-headed axe; El-Adoran the Ranger, with his deadly longbow and the forester´s shortsword; and Volrik the Brave, the swaggering Adventurer. Fools or Heroes ? Only time will tell." 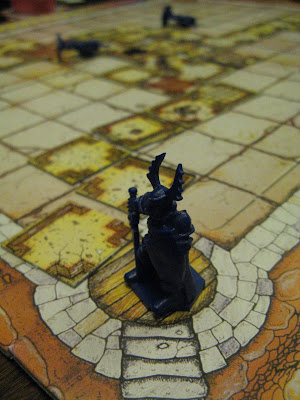 Two expansions were released for the game although I never had these. The first expansion was Heroes for Dungeonquest released in 1987. This added twelve new heroes to the four in the original box plus several additional cards and tokens. The new characters were:

The second expansion, Dungeonquest Catacombs was release in 1988 and added another 20 room tiles, monsters, encounters and objects. Now over 20 years after its original publish date the game still has a significant following of players who continue to venture into the deadly catacombs of Dragonfire Castle. I'm certainly one of them and this is a game that will continue to be played in my house for many years to come.
Posted by BigLee at 10:01