This is 'The Croglin Vampire' painted by Les Edwards and its probably one of the scariest vampire pictures I have ever seen. 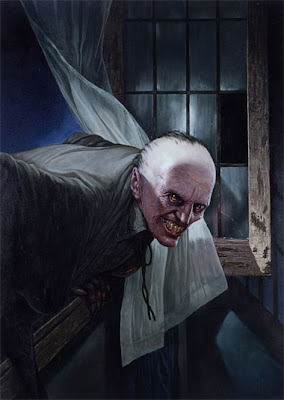 I was first acquainted with this picture from the pages of the Call of Cthulhu RPG (2nd edition I think) and it gave me the creeps just as much back then as it does now. Like many great pieces of art there is a story behind this work.

The Vampire of Croglin Grange is one of the best known vampire stories in England and first appeared in print in a book by Augustus Hare in 1896. The story goes that just after the English Civil War (about 1650 ish) the Grange was let to 2 brothers and a sister (the Cranswells) and at first they loved their new home. However during the hot summer the sister took to sleeping with her shuttered window open, whereupon she was attacked and bitten by the Vampire. Her screams roused her brothers who chased the apparition away.

The next summer the incident was repeated and this time one of the brothers shot the creature in the leg and then tracked it back to a crypt in a nearby churchyard. Upon investigation a single undisturbed coffin was found to contain a corpse with a fresh bullet wound to the leg! The body was duly buried and the incident never repeated.

The story bears an uncanny resemblance to the first chapter of Varney the Vampyre the popular story by Montague Summers and originally published in 1847. Its possible that Hare 'borrowed' the story from the earlier work by Summers but as is the way with these things the story of the Croglin vampire has become woven into local myth and folklore. Either way it makes a good story and proved the inspiration for one of Les Edwards scariest paintings.
Posted by BigLee at 09:01