I recently read a translation of a fourteenth century Byzantine story called Entertaining Tales of Quadrupeds. Written in 1364 the author describes various beasts but for me the most interesting was the description of the Elephant:

"The Elephant then came to centre stage and he addressed the whole assembly thus; Just like a tower, safe and fortified, a fort impregnable, firm in the end, thus too stand I, robust beyond compare. Thus bastions are built on me, made of boards, and solid towers, also, out of wood, soundly fortified. Soldiers in those towers stand resolute, fiercely combat their foes, and overpower and defeat them all."
(Source: A Medieval Miscellany by Judith Herrin - Weidenfeld & Nicolson 1999)

The description reminded me of a model I painted about 18 years ago. I'm not sure who made this model but I remember going to Oxford Street to buy it. Looking at it now its not a very animated war elephant but still a grand centerpiece. In fact I used it a couple of years ago in the climax of a D&D campaign as my players helped defend the city walls against an attack by Dark Elves and their undead allies. 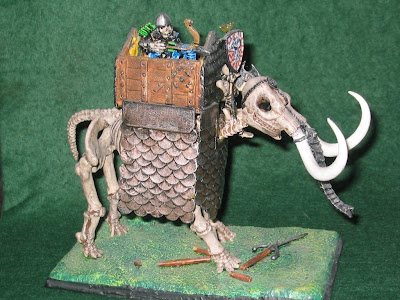 The real War Elephant has been used continuously throughout history but especially by the Indians. They were also adopted by Aleksander (Alexander the Great) and are most famously associated with Hannibal and the Carthaginians. Useful for crushing infantry formations they were also used to break up cavalry charges, because horses hate the smell of them and panic in their presence.

A War Elephant could charge at 20mph and their thick hide and sheer mass made them invulnerable to all except the most experienced infantry. Even the disciplined soldiers of the Romans could not stand against an elephant charge, although they later adopted the tactic of severing the Elephants trunk to induce panic and cause the beast to run amok. Many cultures designed elephant Armour to protect the body and legs of the animal whilst it attacked the enemy. It was also common for a Howdah (the wooden structure described above) to be built and used as a mobile weapons platform. Often archers would shelter here but some armies even mounted heavy weapons such as large crossbow platforms (similar to the ballista) to fire long armor-piercing shafts to kill other enemy war elephants.

Aside from anti-elephant weapons other tactics were also used as a countermeasure against such seemingly unstoppable foes. Disciplined cavalry could induce an Elephant to panic but horses needed to be specially trained for this as the pachyderm smell often scared them. There is also one intriguing (if unverified) account of the use of War Pigs against elephants. Allegedly the squeal of a pig can induce panic in a group of War Elephants and on one occasion flaming pigs were supposedly used to disperse a besieging force that included a large contingent of the beasts!

There are lots of examples of War Elephants in miniature. Pretty much all manufacturers of Ancients miniatures do a version of such an important heavy weapon. Some of my favorites are the 15mm scale elephant by Corvus Belli and the 28mm one by Old Glory. Of course if fantasy (and Lord of the Rings in Particular) is your thing then you can't ignore the War Mumak of Harad by games Workshop.