I've tried several purpose built programmes over the years to create maps of cities, towns and even whole campaign settings. Universally the ones I have used have been excellent, but very hard to learn. In fact I have often felt like I was training to acquire a new skill for work rather than knocking together a map for my D&D campaign. Although the end results looked amazing the amount of time and effort that had to be put in to achieve those results was massively disproportionate to their use in the game itself. One city map I made for instance took over 40hrs labour. That's work, not play.

Then I realised I could make relatively simple maps using nothing more complex than the drawing tools in Microsoft PowerPoint. Its surprising what you can achieve using just the basic shapes available. It may take a little experimentation and fiddling with the formatting of items etc but the results can be quite impressive. The main advantage of using such a simple system is it is quick and easy to learn and all that is needed is a little bit of creativity and patience. The other advantage is that once you have created one standard 'house' for instance you can copy and repeat it very easily.

Here are some examples of the sort of results I have achieved using PowerPoint. This was my map of the Bronze Citadel, a city of Hell for my last campaign. I didn't need individual houses just an overview of the regions of the city and the location of specific buildings and streets. 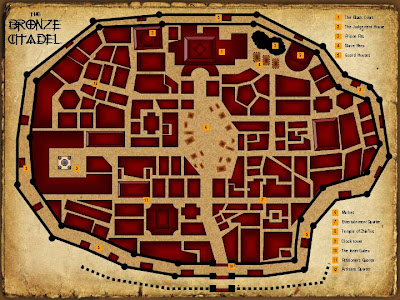 The second map is of Freetown a walled town on the Plains of the Abyss. I imported some small jpg's of buildings taken from other maps and then re sized and positioned them as needed. All the elements of a map made like this are easy to move and re size so its very easy to correct mistakes or evolve a map over a period of time. 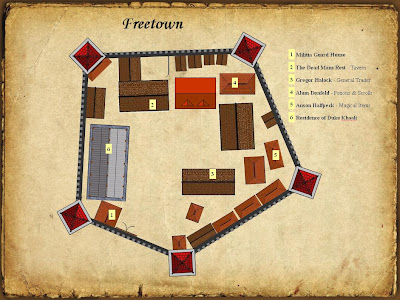 Both maps only took an hour or less to create, much less than the equivalent in an established mapping programme. Yes they are basic and lack the artistry you'll get from a proper package but I'd rather be spending my time writing a good story than being a cartographer.
Posted by BigLee at 09:01