I went to the Museum of Docklands a few months ago and came across this model of the Maunsell Sea Forts. 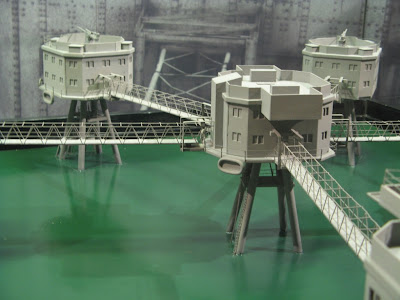 Built in the Thames estuary and operated by the Royal Navy they were designed to deter and report back on any German attempts to lay mines by aircraft in this important shipping channel. As well as extending radar coverage in the Estuary the Army Forts also provided anti aircraft fire. Each of these AA forts carried four QF 3.75 inch guns and two Bofors 40 mm guns. During the war the forts shot down 22 aircraft and about 30 flying bombs. (Source Wikipedia) 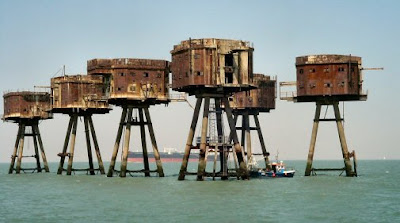 Being a gamer geek I looked at the model and thought this would make a great table for a fictional WWII SS-Jäger Battalion (German Commando) attack on the fort. Somehow I doubt if the Museum of Docklands will let me borrow their display...
Posted by BigLee at 08:01