The Dagenham Dungeon Delvers had a game last night and we continued our 4th Edition D&D campaign in The Sunless Citadels. Our mixed band of Eladrin, Halflings and Dragonborn have been sent to recover an important artifact, the Sceptre of Power, from an abandoned human city. This city, like all remaining human cities is deep underground, humanity having been forced from the surface in an ancient war with the Reptilians. Only the Dragonborn (decedents of slaves) remain with the humans in their subterranean refuge.

In the last game we succeeded in getting the artifact but now we need to escape with our booty! Our return route is full of Orcs heading in our direction and the only other direct road out is guarded by a garrison of Lizardmen. Instead we decide to seek a possible escape route through tunnels Kobolds must have dug to get into the palace complex where we now are. We find the tunnel but have to fight our way through a pair of Drakes first. 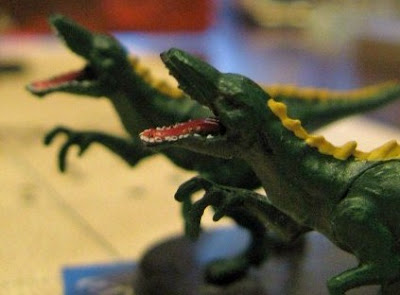 Mid-fight the 'Evil GM' attacks us with two Strige which complicate the battle considerably. 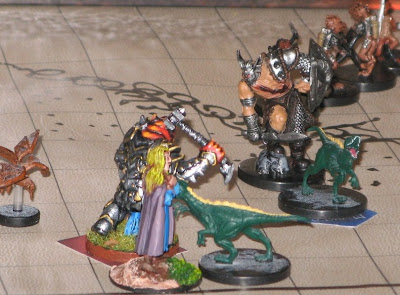 Once victory was obtained we rested before following the tunnel which exits in the surface world! For many of us this is our first experience of the sky and sunlight and our only thought is to get back underground as quickly as possible. Utilizing his innate sense of direction our Halfling ranger lead us towards a gorge known as The Cleft of Jandor. As we decend into the gorge, towards tunnels we know will take us home, we are attacked by three Choakers.

Fortunately we were able to retaliate by taking the mickey out of the GM's shirt. As one player said on entering the room "I didn't know we were doing Line Dancing tonight". The resident artist, Dave Stokes, threw together a quick sketch of our GM in a cowboy hat. 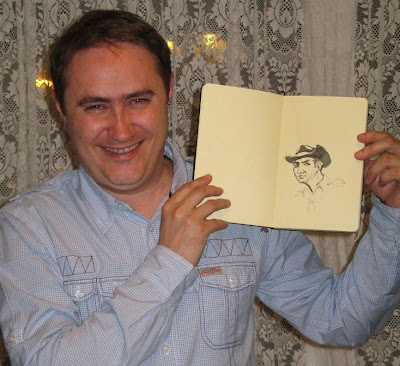 As usual our game was as much about laughter and camaraderie as it was about playing the game. Maybe this isn't to every gamers taste but it suits our group perfectly.
Posted by BigLee at 11:17