I spend a lot of time trawling the Internet for ideas and inspiration, especially for my D&D campaigns. Most of the time the material I find is interesting but not unusual. However I recently came across a mythical beast that I’d never heard of before, probably because as monsters go this one, the Bonnacon, has a rather embarrassing self defence mechanism. 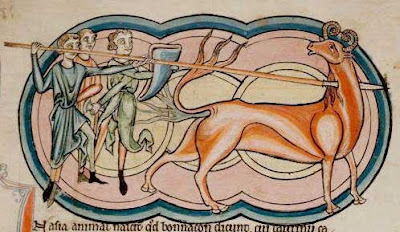 "There are reports of a wild animal in Paeonia called the Bonasus, which has the mane of a horse, but in all other respects resembles a bull; its horns are curved back in such a manner as to be of no use for fighting, and it is said that because of this it saves itself by running away, meanwhile emitting a trail of dung that sometimes covers a distance of as much as three furlongs, contact with which scorches pursuers like a sort of fire." [Pliny - Natural History, Book 8, 16]

The Bonnacon is also mentioned in a number of medieval Bestiary’s including a fully-illustrated Latin manuscript currently held at the Bibliothèque Nationale. This creature is also described in the famous Aberdeen Bestiary, written and illustrated in England about 1200 AD, and is considered to be one of the best examples of its type. This document describes the Bonnacon as an Asian beast whose head is like a bull but with horns curled inwards. Also referred to as the Bonasus or Bonacon, medieval illustrations of the beast’s skin are almost always depicted as reddish in colour and lacking any signs of hair. As in previous descriptions this beast expels burning dung when threatened and the illustration in this Bestiary shows the wise hunter protecting himself with his shield. 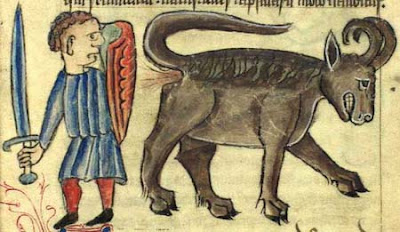 I love the Internet. Sometimes you can find some real gems of information... and other times you find Napalm excreting Bison.
Posted by BigLee at 08:01

Email ThisBlogThis!Share to TwitterShare to FacebookShare to Pinterest
Labels: Myths and Legends