All GM's have done it at some point and given their players a map or a letter written on fake parchment. But props can be so much more than just 'player handouts' or miniatures. I have made my love of Floorplans or Dungeon Tiles clear in this blog several times. However I also enjoy using other in-game props or visual aides when running a D&D campaign. 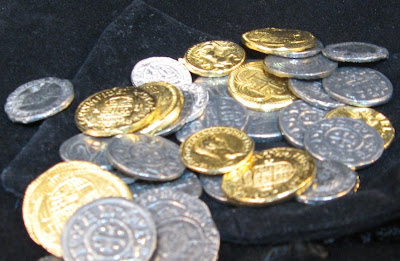 Here are a few of my favorite props from my own campaign.

I once gave my players a small wooden chest filled with maps, inventories, and all sorts of clues. The contents of that box kept the group occupied for half the game session without me having to do anything. Of course roleplaying games are primarily about imagination but it doesn't hurt of you can provide your players with something tangible and real to hold.