Just thought I'd show off some of the stuff I bought at SELWG. Nothing too dramatic as I am saving most of the money I made on the Bring and Buy for a particular purchase online. Having said that coming home with a bag full of goodies is always great. 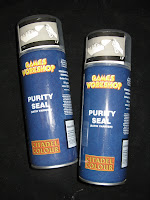 Shows like SELWG are a chance to stock up on consumables without the added cost of postage. But often a bargain can also be had and these can of Purity Seal at £5 each couldn't be ignored. 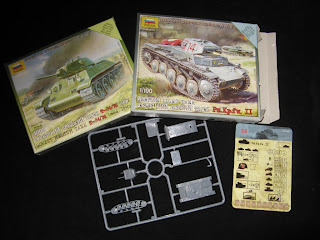 I've been wanting to get my hands on some of these Zvezda models for a while and at just £2.50 each they couldn't be ignored. I picked the Panzer II and T34 just because I like these vehicles. Now that I have seen the quality of them I may pick up some others in the range. 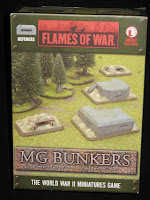 This was a last minute purchase just because I like bunkers and because they were 15% off. I'm a sucker for a discount. I was considering scratch building some bunkers but was unsure about the scale. Now that I have this set I have a frame of reference and feel a little happier about making some. 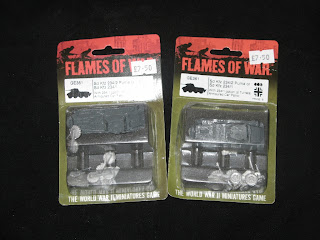 I wanted to buy three of these Puma Armoured Cars but there were only two in stock at the show. I bought them anyway and will try to get the third online or at a later show. I do like these vehicles and look forward to testing out their performance in battle. 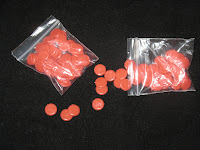 After my last FOW game I realised how hard it can be to keep track of the number of hits (vital for determining if a platoon is pinned down or not). These small counters from EM4 were just £1 and I hope will prove to be very useful in the next game. 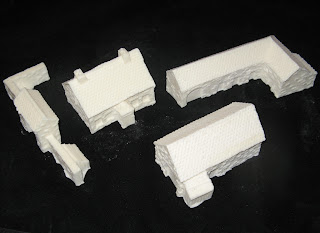 Another last minute purchase and one of my favourites of the show. There were a whole range of resin buildings in 15mm and this set came in a single pack for just £13. Its meant to be a courtyarded farm, similar to La Haye Sante at Waterloo. However it could easily be painted to look like any similar farm complex in Normandy 1944. Of course I could also use the buildings individually and as such I think these represent excellent value.


OK, this I'll make this the last word on SELWG. One blog I read commented on the limited frontage of some of the trade stands. This make getting to the stock for a close up look quite difficult. I noticed this problem as well, although it has to be said I understand the pressures on traders to balance costs verses sales. I don't know how much SELWG were charging for a plot but clearly some traders could have benefited from larger display space.
Posted by BigLee at 10:08