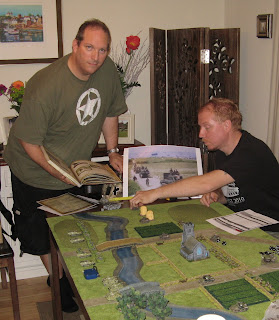 I got a Flames of War game in on Saturday, the second of two games over the weekend! These small games were more about learning the rules than anything else but they were fun non-the-less. For both games I used the same forces facing off against each other but with slightly different terrain layout. We didn't use any of the scenarios from the rulebooks though, this was just a plain and simple fight to the death. As I said the real objective of the game was to get stuck into learning and understanding the rules.

The 'table' size was limited by the actual dimensions of the table we were playing on; in this case 4' x 3'6". Not   ideal but beggars can't be choosers as the saying goes. I set up the terrain to keep things simple but utilizing enough features to give us a chance to get familiar with different types. Ray - my brother-in-law and opponent for the game - then chose which side to deploy. 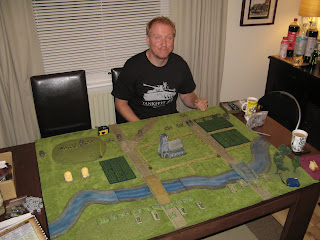 One thing you'll see from the pictures is that we both seemed to have a case of mistaken identity. Ray played the US 2nd Armoured but was wearing last years Tankfest T-Shirt with a picture of Tiger 131 on it. Meanwhile I was playing the German Panzer Lehr but wore a T-shirt featuring the us/allied star star emblem.

Ray deployed his rifle platoon over a large area which reduced its effectiveness but also denied me lots of targets to shoot at (because of terrain) . His Stuart platoon was deployed on his right, opposite my Panzergrenadiers, but had to cross several areas of rough terrain to reach me. His two Sherman 76's were on his left flank facing off against my Panzer IV's.

Meanwhile I deployed my Panzergrenadiers and my Panzer IV's to guard the Left and Right bridges respectively. When we had finished deploying I gave Ray a chance to redeploy now that he knew where I was. He made some small adjustments, mostly to move units into better command distance. We then rolled to see who would go first and Ray one the roll. 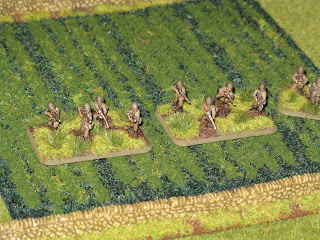 On mass he began to move all his units forward. One of the Stuarts bogged down in the first movement phase and remained bogged down for most of the battle. We reckon the crew were having a cup of Joe and only rejoined the battle when they had finished! The rest of his forces had no such problem and his infantry made full use of the cover in the centre of the battlefield. I fully expected the first shooting phase to be relatively ineffectual as all his vehicles had moved and their Rate of Fire (ROF) was therefore reduced to 1. But Ray showed his natural luck with the dice and destroyed two of my Panzer IV's with his first round of fire from his Sherman's!

My first turn saw my Panzergrenadiers consolidate their position along the river bank either side of the bridge on my left. My remaining Panzer IV's decided to hold their position and maximise their ROF against the advancing Sherman's. This paid off as one Sherman was left burning by the end of my turn. By this stage I was getting worried, my Panzergrenadiers looked incredibly outnumbered facing most of Rays Rifle Platoon and the Stuarts. But I (and Ray) underestimated the high ROF of my MG Teams when stationary and dug in. By this stage all the Stuarts (baring the one still having breakfast at the rear) were in range of my Panzerfaust teams and a large number of his rifle teams were also within sight of my MG's. Within two rounds all but one Stuart were in flames and four rifle teams had been killed. The American right flank was disintegrating.

The last couple of turns of the game were just a drawn out death rattle for the Americans as the panzer IV's finished off the last Sherman and the Panzergrenadiers began pushing across the bridge and outflanked what was left of the US Rifle Platoon. My troops didn't escape unscathed but by concentrating my forces against rays strung out rifle platoon I was able to gain local superiority and roll up his line.

This game was purely an excuse to learn the rules, especially for my Brother-in-law as he's not played any wargames before. I think we learned a lot with this small game and we certainly felt like we covered a lot of the rules and clarified our understanding of them. I've never been the sort of person that finds it easy to sit down, read rules and absorb them 'dry'. I'm much more of a hands-on kind of person. The Flames of War rulebook is a hefty 258 pages and just looking at it makes me want to go back to firing rubber bands at my figures to determine victory instead of rolling dice. Playing through the rules and taking our time to absorb them has helped us both. Now we need to follow up with a larger battle to ram home what we have learned.
Posted by BigLee at 14:29